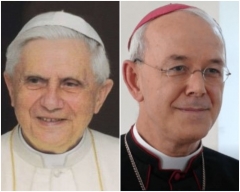 In a statement provided to LifeSiteNews, Bishop Athanasius Schneider thanked Pope Benedict XVI, now retired, for stating that abortion and gay marriage reflect the spirit of the Anti-Christ. He added that the Anti-Christ not only rejects Jesus Christ, the order of salvation, but also rejects the order of creation, nature itself, the "order of the two biological sexes," and the "absolute prohibition of killing innocent human beings."

Last week, it was revealed that in a new biography of Pope Benedict XVI, the retired pontiff says, “One hundred years ago, everybody would have considered it to be absurd to speak of a homosexual marriage. Today, one is being excommunicated by society if one opposes it.”

The former Pope also reportedly states that people face social excommunication if they oppose abortion and "the creation of human beings in the laboratory." This excommunication, this fear is a manifestation of the "spiritual power of the Anti-Christ," claims Benedict.

In response to Pope Benedict's remarks, Athanasius Schneider, the auxiliary bishop of Astana, Kazakhstan, thanked him for raising this "important topic" and said he agreed with him.

"The promotion and justification of abortion and homosexuality or the gender ideology contains in itself the spirit of a revolt against God, and in this sense it reveals to have the characteristic of the Anti-Christ," said Bishop Schneider in his remarks to LifeSiteNews.com.

"So, the ideology of abortion and homosexuality reveals to be a revolt against God and thus to have the characteristics of the Anti-Christ," said Bishop Schneider.

"The killing [of] innocent babies in the womb of their mothers and the turning upside down [of] the created order of the two biological sexes and of marriage and family, is an expression of the attitude of the Anti-Christ," added the bishop. The Anti-Christ "seeks to put himself in the place of God."

The new biography “Benedict XVI--The Biography, was written by Peter Seewald.  The first volume of this two volume biography will be available in English in November, according to Amazon.com.