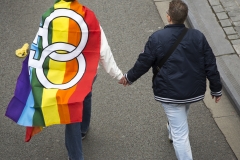 On Monday, May 10, Catholic priests blessed gay couples at more than 100 parishes in Germany, in defiance of the Vatican. Those actions, according to Fr. Hugo Valdemer, a priest with the Archdiocese of Mexico, were an "act of rebellion against the Pope" and the Church, and constituted a "truly diabolical act of pride and immorality," reported the Catholic World Report (CWR).

In March, the Vatican reaffirmed the Church's 2,000-year-old position that it "does not have, and cannot have, the power to bless unions of persons of the same sex...." It also declared that God "does not and cannot bless sin."

Nonetheless, many German priests went ahead and performed the blessings. Although there are many faithful priests, bishops, and lay-people in Germany, the Catholic Church there may be slipping into schism, according to many news reports. A May 11 New York Times commentary was headlined, "Pope Francis Faces Another German Reformation."

Commenting on the blessing of homosexual couples in Germany, Fr. Valdemer said it was "not only an act of indiscipline and rebellion against the Pope and the Congregation for the Doctrine of the Faith (CDF), it is a truly sacrilegious act."

"[P]ersons can always be blessed, even if they are sinners, but that which is in itself a serious sin and offensive to God, such as homosexual acts, cannot be blessed," said Fr. Valdemer, as reported by CWR.

He also said that a same-sex blessing “is more than an act of indiscipline, it’s an actual defiance of God and his natural law, a contempt for Sacred Scripture that considers these acts as grave sin and an abomination, and  profound contempt for the perennial teaching of the Church on this grave sin.”

“In short, it is a truly diabolical act of pride and immorality,” said Fr. Valdemar.

The Catholic Church teaches that having same-sex attraction is not sinful, but engaging in homosexual behavior is sinful.

As the Catechism of the Catholic Church states, "The number of men and women who have deep-seated homosexual tendencies is not negligible. This inclination, which is objectively disordered, constitutes for most of them a trial. They must be accepted with respect, compassion, and sensitivity. Every sign of unjust discrimination in their regard should be avoided. These persons are called to fulfill God's will in their lives and, if they are Christians, to unite to the sacrifice of the Lord's Cross the difficulties they may encounter from their condition."

The Catechism also states that "homosexual acts are intrinsically disordered. They are contrary to the natural law. They close the sexual act to the gift of life. They do not proceed from a genuine affective and sexual complementarity. Under no circumstances can they be approved."

As reported in CWR, Fr. Valdemar explained, “what is unacceptable for the Church is the sin of lust, whether between heterosexual or homosexual people. Some ill-intentioned people try to make the Church’s rejection of sin the same as rejecting the sinner, which isn’t true.”

“For the sinner, whatever his sin may be, the doors of mercy will always be open, but the requirement for repentance and conversion will always be there,” he said.

The priest also emphasized that Catholics must watch what is happening in Germany “so as not to allow ourselves to be enveloped by this perverse mentality of gender ideology that is slowly permeating society.”

“In addition to being vigilant, we must call for the unity of the Church, which is undoubtedly at risk because what is happening in Germany is in fact already a lamentable schism,” he added.