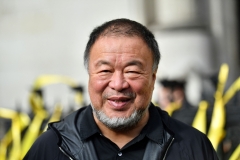 Chinese artist and human rights activist Ai Weiwei, who has been harassed and jailed by Communist Chinese officials in the past, said on Friday that Americans are, in many ways, already living in an "authoritarian state," but "just don't know it."

Weiwei's father, a poet, was punished by the Communists during Chairman Mao's Cultural Revolution. Some of America's "political correctness" is like that cultural repression, and "this is very dangerous," he added.

Weiwei also said he does not see Donald Trump as "authoritarian," the coverage of the leftist press notwithstanding.

During a Nov. 12 interview on Firing Line with Margaret Hoover, a PBS program, Margaret Hoover asked WeiWei, "In your book, you were describing the directives of Mao Zedong during the Cultural Revolution that would be distributed publicly every night.
And then you write, this is your quote: 'These messages served a function similar to Donald Trump's late-night tweets while in office. They were the direct communication of a leader's thoughts to his devoted followers, enhancing the sanctity of his authority.'"

"So do you see Donald Trump as an authoritarian?" asked Hoover.

Weiwei replied, "I, well, I don’t — you know, he — If you are authoritarian, you have to have a system supporting you. You cannot just be an authoritarian by yourself. But certainly, in the United States, with today’s condition, you can easily have an authoritarian."

"In many ways, you’re already in the authoritarian state," he said. "You just don’t know it.

Weiwei: "Many things happening today in U.S. can be compared to Cultural Revolution in China."

Weiwei: "Like people trying to be unified in a certain political correctness. That is very dangerous."

Weiwei's new book, released this month,  is 1000 Years of Joys and Sorrows.

More than 65 million people have been killed in Communist China for political reasons since the communists took control in 1949-50.  Today, an estimated 1.5 million Chinese are held in concentration camps, where they are tortured, raped, sterilized, killed, and are victims of organ harvesting.

According to the United Nations Human Rights commission, “[T]he most common organs removed from the prisoners are reportedly hearts, kidneys, livers, corneas and, less commonly, parts of livers. This form of trafficking with a medical nature allegedly involves health sector professionals, including surgeons, anaesthetists and other medical specialists.”

The organ harvesting is targeted at "minorities, including Falun Gong practitioners, Uyghurs, Tibetans, Muslims and Christians, in detention in China," states the U.N.