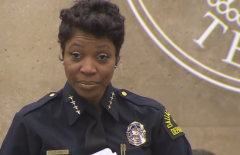 Six hundred seventy-four protesters were issued "at-large" arrest charges and put in zip-tie handcuffs by Dallas police on June 1 for blocking traffic on the Margaret Hunt Hill Bridge.  Police Chief Renee Hall said, "We warned them. ... If you break the law, we will arrest you."

The large group was marching to honor George Floyd and to protest the Minneapolis police officers allegedly responsible for his death on May 25.

"There are many who question and are not happy with the decisions that I made on yesterday," she said. "Let me be clear, I am not here to make people happy. My job and our job in law enforcement is to keep this city safe. We have pledged that. We will do that. And that is our goal."

"Although peaceful, the protesters broke the law," said Hall.  "On last night, they assembled and then they began to walk, and we supported that walk. When they began to enter the Margaret Hunt Hill Bridge they were given a warning because it is against the law."

"The penal code 42.03, obstruction of a highway or passageway, says they are not allowed to walk in the middle of the roadway or freeway or overpass," she explained.

"We warned them," she added. "They did not stop. They decided to take a knee on the bridge and hold their hands up and say, 'Don't shoot!'"

"Again, no one should be surprised because my statement is, if you break the law, we will arrest you," said the police chief.

The 674 protesters were charged with obstructing the highway. Their personal information was taken and they were given "at-large" charges. For several hours the protesters were detained by police in flexicuffs and then released to exit the bridge.

Protester Weston Lucas told FOX 4 News, “You could hear them doing the foam bullets, and then they dropped more tear gas. I could hear screaming. Everybody was like, ‘Get down! Get down! Cover your head.’”

“They didn't know what to do with us, like, are we going to take them all the jail?" said Lucas. "We don't have room for this many people."

Another protester, Dede Alexander said,  "They advanced on us. We were basically sitting ducks. We were helpless. They did not give any direction. Still, there was no communication."