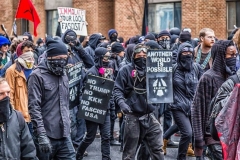 While discussing Antifa's role in the riots and looting in U.S. cities, conservative scholar and best selling author Dinesh D'Souza said the organization is the "true descendant" of radical left socialist paramilitary groups, such as Mussolini's Black Shirts and Hitler's Brown Shirts.

He added that Antifa has melded its Marxism with "identity politics," such as "racial" or "gender" grievance, and this has produced a "kind of identity socialism."

When asked about Antifa on The Ingraham Angle on Monday night, D'Souza said, "I think Antifa is the true descendant of the socialist regimes of 100 years ago – Mussolini’s Black Shirts, Hitler’s Brown Shirts. These are paramilitary that these socialist leaders needed in order to achieve political objectives that couldn't be achieved any other way."

"So the purpose of Antifa is to ultimately intimidate, to beat you into submission," said D'Souza. "And the dirty little secret is that powerful people in Hollywood and academia in the media believe that they need a paramilitary."

"They need a paramilitary because the socialist ideas that they believe in cannot win on their own merits," he said.  "You have to sort of put the other guy up against the wall. And so it's very convenient for them that you've got this kind of little army."

"By the way, other socialist regimes around the world, like in Venezuela, they have the same thing, ‘collectivos,’ these former criminals who now ride around on motorcycles, and they carry the same equipment -- cement blocks, they carry sticks," said D'Souza.

"What's their job?" he added.  "To beat up small business owners, to beat up political dissidents. So this is not about fighting fascism. This is about ultimately fighting people who stand in the way of the socialist left."

Later in the discussion, host Laura Ingraham asked, "Dinesh, there are a lot of white youth in Antifa that I saw last night. I could see them pouring into the city [D.C.]. They were coming in late, right near the curfew point. And people like Keith Ellison, attorney general of Minnesota, claiming he doesn't really know much about Antifa today. We don't have to play the soundbite, but he is feigning ignorance about Antifa. Do you buy that?"

A Jan 3, 2018 tweet from Keith Ellison (D), a former member of Congress, former deputy chair of the DNC, and now the Attorney General of Minnesota. (Twitter)

D'Souza said, "Not at all. I think that what we are seeing here with the George Floyd injustice is the fact that socialism has kind of taken on a new guise. Originally, it was about the working class. Marx focused, for example, on the working man who was working long hours and not getting properly paid."

"So now they focus on racial grievance," said D'Souza. "This is something that they started doing in the 60s. It represents a kind of mutation in socialism away from merely focusing on class to now focusing on race, on gender, sexual orientation, immigration."

A May 31, 2020 pro-Antifa tweet by Jeremiah Ellison, son of Keith Ellison, after President Trump decided to declare Antifa a domestic terrorist organization. (Twitter)

D'Souza is the author of numerous books, including the New York Times best sellers America: Imagine a World Without Her, The Roots of Obama's Rage, and Death of a Nation. His most recent book is The United States of Socialism.