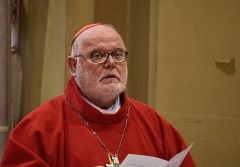 In a move that many observers view as schismatic, German Catholic leaders voted overwhelmingly (168-28) to approve blessings for gay couples. This is in defiance of a Vatican ban on the practice, and in contradiction of Church teaching that conjugal unions are reserved only for one man and one woman in marriage.

As the Wall Street Journal reported on Oct. 1, "At a meeting in Frankfurt, German church leaders voted 168 to 28, with five abstentions, to adopt a draft statement on sexuality that includes a resolution saying that 'same-sex partnerships who want to take the risk of an unbreakable common life … should be able to see themselves placed under the blessing of God.'"

Rev. Burkhard Hose, who opposes the Vatican ban on gay blessings, "said the decision was 'a milestone in the journey toward a church without discrimination, a church full of respect for the diversity of love and partnerships,'" reported The Journal.

However, Annette Florczak with Maria 1.0, which supports Catholic teaching, said, "It shows that the church in Germany is guided by secular values, and by worldly ideologies. Apparently the members of the Synodal Path see the church as a democracy where teachings and truth change with a majority vote. It is beyond presumptuous and beyond depressing.”

The Catholic Church opposes "gay marriage" and teaches that "homosexual acts are intrinsically disordered. They are contrary to the natural law. They close the sexual act to the gift of life. They do not proceed from a genuine affective and sexual complementarity. Under no circumstances can they be approved."

The proposal by the German Catholic leaders can be revised and is subject to final approval by a supermajority of two-thirds of 69 bishops participating in next year's synod meetings, reported The Journal.

Author Rod Dreher, a former Catholic and now Eastern Orthodox Christian, wrote in The American Conservative, "I don’t see any way around it: this is schism. You might hate what the Catholic Church teaches about homosexuality, and sexuality in general, but the tradition is absolutely clear, strongly rooted in Scripture, and has been clear for two millennia."

"There is no way you can do what the German bishops have done without repudiating unambiguous church teaching," said Dreher. "What will happen to German Catholics now -- those who wish to remain Catholic, as opposed to schismatic? What will they do?"

In concluding his commentary, Dreher writes, "Understand what I’m saying here: the German Catholic bishops are not only rejecting an authoritative, binding teaching of the Magisterium, but they are also denying what traditional Christianity teaches is the structure of reality itself. This is why sex matters."

Rev. Jerry Pokorsky, pastor of St. Catherine of Siena parish in Great Falls, Va., said of the German proposal: "It isn’t a surprise that the vast majority of German bishops do not think homosexual acts are sinful. Their studied ambiguity on the subject has been on display for years. It isn’t even surprising to suspect that a considerable number of German bishops may be active homosexuals."

"Anyone who celebrates 'the diversity of love and partnerships' should not object to the suggestion that 'celebrating diversity' is code for 'celebrating sodomy,'" wrote Pokorsky.

"But it’s astounding that the vast majority of German bishops are willing to deny their apostolic authority," he continued.  "Their votes, in effect, sever them from the Church and declare that they are not qualified to make pronouncements on Christian marriage. 'Their end is destruction, their god is the belly, and they glory in their shame.'"(Phil. 3:18)