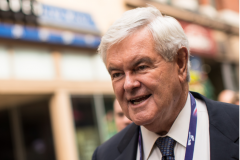 On Thursday, FNC's Laura Ingraham presented several examples of the leftist "mainstream" media lying or grossly distorting the facts about the fatal shooting of a black teenage girl in Columbus, Ohio, contending that it reminded her of the press in the Soviet Union, which printed "lies every minute of every day."

In response, her guest on the Ingraham Angle, Newt Gingrich, said the situation with the U.S. media is "more like Maoist China." Gingrich, a former Speaker of the House, added that "the left hates the police," and the Biden administration "distorted what happened" in order to push its "institutional racism baloney."

"I feel like I'm back in the Soviet Union, where I was a student in the 80s," said Ingraham, "and it's gotten worse, like day by day, it's getting worse."

Gingrich said, "Yes, and I actually think it's more like Maoist China, in the totality of the social brainwashing, the conditioning, the punishment, or the requirement to speak up and admit your guilt, even if you're not guilty of anything."

"But notice also, a policeman in Columbus was operating in the shadow of an event that had happened earlier, in Cincinnati, where one 13-year-old girl killed with a knife another 13-year-old girl," said Gingrich.

Image from police officer's body-cam showing Ma'Khia Bryant, apparently with a knife in her hand, struggling with another woman seconds before she was shot by the officer. Bryant, 16, reportedly died at the scene, in Columbus, Ohio, April 20, 2021.

"So, he knew because it just happened a couple of days ago, he knew that there was a very real danger, that the young woman with the knife was literally going to kill the person who needed help," said the former Speaker.

"And I think it's almost barbaric," he said. "That people on the left, including, by the way, the Biden White House, which immediately distorted what happened and tried to turn it into this institutional racism baloney."

"And I think that as people see the footage, as they think about it, that policeman had an obligation to be biased in favor of the innocent and to be biased against the criminal," said Gingrich.

Ingraham then played a clip of left-wing Rep. Ilhan Omar (D-Minn.), speaking at a funeral, and then bringing up the death of the 16-year-old girl in Columbus. “Just like we’ve been visited by tragedy here in Minnesota often, she in Columbus, Ohio, was visited by a tragedy of a young woman whose life was taken by Columbus police,” said Omar.

In reaction, Gingrich said, "[T]he fact is that the left hates the police, that we're faced now with a governing party from the White House to the House and the Senate, which is actively pro- criminal and actively anti-police and anti-law enforcement. And you're seeing the cost of it."

"I mean the skyrocketing murder rates in this country," he said. "The skyrocketing non-fatal shooting rate is just astonishing. You're seeing a rise in carjacking. And I think what you're going to find is that when you have hatred of the police being propagated by a politician under funding being deliberate, and all of the bias being in favor of the criminals, well, what you're going to end up with is a lot more criminals and a lot less safety."

"And that's what the Democratic Party stands for today," said Gingrish. "And I think those of us who are not taken in by this have an obligation to speak very bluntly and very truthfully. These are policies that are killing people, and they're killing innocent people. They're killing them by setting up situations where, frankly, the fewer police you have, the less well-trained they are, and the more they are intimidated by the media."