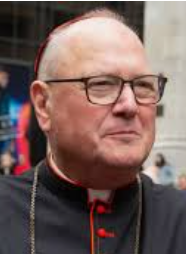 Catholic Cardinal Timothy Dolan, the archbishop of New York, wrote about the upcoming anniversary of Roe v. Wade in his latest column, explaining that Catholics are "obsessed" with ending abortion and added that incoming President Joe Biden ran on a rabidly pro-abortion platform that supports "this gruesome capital punishment for innocent pre-born babies."

Dolan says that a well-known political leader asked him why Catholics are "so hung up about abortion?"

Dolan replied, “Actually, we’re obsessed with the dignity of the human person and the sacredness of all human life! Yes, the innocent, helpless life of the baby in the womb, but also the life of the death row prisoner, the immigrant, the fragile elderly, the poor and the sick.”

He also explained that abortion has nothing to do with religion, but with science, basic biology.

"[T]his is not a uniquely ‘Catholic’ issue at all, but one of human rights," said the Cardinal.  "We didn’t learn that abortion was horrible in religion class, but in biology, and in our courses on the ‘inalienable rights’ tradition in American history.”

If you think American culture is too harsh and violent, look at how we treat the most vulnerable, he said.

“How can we sustain a culture that recoils at violence, exclusion, suicide, racism, injustice, and callousness toward those in need, if we applaud, allow, pay for, and promote the destruction of the most helpless, the baby in the womb?” said the Cardinal.

To borrow from Mother Teresa in a 1997 speech, "What is taking place in America is a war against the child. And if we accept that the mother can kill her own child, how can we tell other people not to kill one another?"

Joe Biden and Kamala Harris support abortion on demand. On their campaign website, it states, "As president, Biden will work to codify Roe v. Wade, and his Justice Department will do everything in its power to stop the rash of state laws that so blatantly violate the constitutional right to an abortion, such as so-called TRAP laws, parental notification requirements, mandatory waiting periods, and ultrasound requirements."

It also states that Biden supports "repealing the Hyde Amendment."

Commenting on the "Catholic" Joe Biden, Cardinal Dolan wrote in his column, "We’re even more 'hung up' now, as our new president, whom we wish well, and who speaks with admirable sensitivity about protecting the rights of the weakest and most threatened, ran on a platform avidly supporting this gruesome capital punishment for innocent pre-born babies.

"As Pope Francis observes, 'We defend and promote all legitimate human rights. But, what use are they if the right of the baby to be born is violated!'"