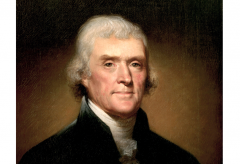 At the urging of the New York City Council's Black, Latino and Asian Caucus, city officials are preparing to approve the removal of a statue of Thomas Jefferson that has stood in City Hall for nearly 200 years, reported the New York Daily News.

The request to remove the statue was made by the caucus to the Public Design Commission, which oversees art on city property.

In a letter last year to Mayor Bill de Blasio,  members of the Caucus and the City Council wrote, "There are disturbing images of divisiveness and racism in our City that need to be revisited immediately. That starts with City Hall.

"The statue of Thomas Jefferson in the City Council Chambers is inappropriate and serves as a constant reminder of the injustices that have plagued communities of color since the inception of our country. It must be removed.

"Jefferson is America’s most noted slave holder, a man who owned more than 600 Black women and men and a scholar who maintained that Blacks were inferior to whites.

"The City Council Chambers is a place where we vote on bills to improve the lives of all New Yorkers and build a more fair and just city. It is not a suitable place for a statue of Thomas Jefferson. Keeping it in City Hall sends a terrible message to the people who are counting on us to work towards a more equitable New York City.

"We urge you to support our efforts as we go to the design commission to expeditiously remove this statue."

The Public Design Commission is scheduled to meet on Monday, Oct. 18, when it likely will approve the statue's removal.

As Mayor de Blasio to the Daily News, “I start with the assumption that it will be approved, but I don’t know. That’s ultimately a decision that that commission makes. The City Council spoke out of their belief of what is right for their chamber, for their side of City Hall, and that to me is just a straightforward matter. If that’s what they feel, I want to respect them as another branch of government.”

De Blasio stressed that neither he nor his wife, who is on the commission, asked for the statue's removal.

The statue has been in City Hall for 187 years.

Thomas Jefferson (1743-1826) was the primary writer of the Declaration of Independence, the first Secretary of State under President George Washington, the second vice president under John Adams, and the third president of the United States (1801-1809). After he retired, Jefferson founded the University of Virginia.