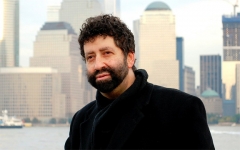 The United States is in "deep, deep trouble" and must repent and return to God in humility and prayer, according to Pastor Jonathan Cahn, a Messianic Jew and best selling "End Times" author who is a co-chair of The Return, a global movement that will publicly appeal to God on Sept. 26 on the National Mall in Washington, D.C.

"We are in a critical time in America," wrote Cahn and co-chairman Kevin Jessip in a May 21 commentary for CBN News. "We have been warned. God in His mercy has afforded us a time of reprieve to turn and repent for our land to be spared from destruction. It's a Nineveh moment!"

"'The Return' is a chance for America, 40 days prior to our next election, to turn back to God, just like Nineveh," said Cahn and Jessip. "The Return is the gathering to spark a movement to gather, fast, pray and repent for our wickedness."

It is the hope of Cahn and his fellow organizers that The Return on Sept. 26 "will wake up the American people while there is still time," they said. "Our prayer is that our nation will return to the values and the principles upon which this nation was founded."

Cahn and Jessip list 16 reasons why America is in "deep, deep trouble." Some of those reasons include,

-- The national debt under President Ronald Reagan in the early 1980s was less than $1 trillion. Today, the national debt is more than $25 trillion. "We have been stealing money from our children and our grandchildren at the rate of more than $100 million an hour, and yet most Americans don't seem to care that we are rapidly bankrupting our nation," said Cahn and Jissip.

Drag queen "Pickle" reads from a book during the Drag Queen Story Hour program at the West Valley Regional Branch Library on July 26, 2019 in Los Angeles, California. Drag Queen Story Hour is a program featuring drag queens reading stories to children at libraries, schools, and bookstores in cities across the nation. (Getty Images)

-- "In 2001, nearly 16 million Americans could not afford the homes that they were living in, but by 2015 that number had more than doubled."

-- "In the early 1970s, 70% of all men in the United States from the age of 20 to the age of 39 were married, but today that number has fallen to just 35%. Instead of getting married and starting families, many young men are still living at home with their parents."

-- "According to the CDC, 110 million Americans currently have a sexually transmitted disease, and there are approximately 20 million new STD cases in the United States every single year."

-- "Today, there are more than 4 million adult websites on the Internet, and they get more traffic than Netflix, Amazon and Twitter combined."

July 4th, 2015 Austin, Texas USA: A week following the US Supreme Court decision legalizing same-sex marriage in the US, dozens of couples were married during a mass gay wedding ceremony on lawn of the Texas Capitol building. (Photo by Robert Daemmrich Photography Inc/Corbis via Getty Images)

-- "Since Roe v. Wade was decided in 1973, nearly 60 million American children have been murdered in America's abortion mills. Sadly, the number of children aborted each day in this country is roughly equal to the number of Americans who lost their lives on 9/11."

"We are in a critical time in America," wrote Cahn and Jessip.  "We have been warned. God in His mercy has afforded us a time of reprieve to turn and repent for our land to be spared from destruction. ... "The Return is the gathering to spark a movement to gather, fast, pray and repent for our wickedness."

To learn more about The Return on Sept. 26, click here.

Jonathan Cahn, raised as a Jew, believes that Jesus Christ is the Messiah foretold in the Old Testament. Cahn is head of The Jerusalem Center, Beth Israel in Wayne, N.J. Kevin Jessip is president of the Global Strategic Alliance.