Poll: Most Americans Agree With J. K. Rowling, There are Only Two Genders 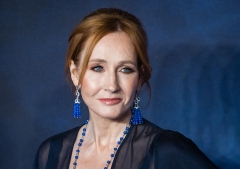 J.K. Rowling, the best selling author of the hugely popular Harry Potter series, has criticized some aspects of transgenderism, which have sparked attacks against her on social media and in other venues. However, a new Rasmussen poll shows that 75% of American adults agree with Rowling that there are only two genders.

Rowling does not dismiss transgenderism as a real condition, but she has questioned how, politically, it is eroding the legal definitions of male and female, and is destroying girls' rights and women's sports.

In a June 2020 article, Rowling said, "It’s been clear to me for a while that the new trans activism is having (or is likely to have, if all its demands are met) a significant impact on many of the causes I support, because it’s pushing to erode the legal definition of sex and replace it with gender."

In June of 2020, she tweeted, "If sex isn’t real, there’s no same-sex attraction. If sex isn’t real, the lived reality of women globally is erased. I know and love trans people, but erasing the concept of sex removes the ability of many to meaningfully discuss their lives. It isn’t hate to speak the truth."

War is Peace.
Freedom is Slavery.
Ignorance is Strength.
The Penised Individual Who Raped You Is a Woman.https://t.co/SyxFnnboM1

This month, Rowling jumped back into the fray because Scotland is considering labeling transgender females (biological males with penises) as "women," in incidents of rape.

In a Dec. 12 tweet linking to an article, "Absurdity of police logging rapists as women," Rowling -- borrowing from George Orwell -- wrote, "War is Peace. Freedom is Slavery. Ignorance is Strength. The Penised Indiviual Who Raped You Is a Woman."

Writer Aidan Comerford was quick to smear Rowling, tweeting, "TW: transphobia. Even if a trans woman is a perfectly law-abiding citizen, I doubt JK Rowling would accept that she is a woman, so all she is really doing here is using her Twitter account to call trans women 'penised individuals.'"

‘People who menstruate.’ I’m sure there used to be a word for those people. Someone help me out. Wumben? Wimpund? Woomud?

Another social media critic wrote, "Rowling pouring her garbage transphobia all over Twitter right before the trailer for her new movie, and I'm sure all her fans will be absolutely fine with celebrating and defending her work like nothing happened and trans people can just go f*** themselves and die in silence."

According to Rasmussen on Dec. 27, "Transgender activists have accused J.K. Rowling of 'hate speech' for saying it, but most Americans agree with the Harry Potter author that there are only two genders."

"The latest Rasmussen Reports national telephone and online survey finds that 75% of American Adults agree that there are only two genders, male and female," said the survey firm. "That total includes 63% who strongly agree. Eighteen percent (18%) disagree.