Putin: ‘If Ukraine Joins NATO and Attempts to Bring Crimea Back by Military Means, the European Countries Will Be Automatically Pulled Into a War Conflict With Russia’ 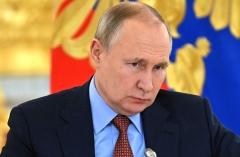 In a speech on Monday in Moscow, following diplomatic talks with French President Emmanuel Macron, Russian President Vladimir Putin stressed that if Ukraine joins NATO and tries to retake the Crimea, Europe "will be automatically pulled into a war conflict with Russia."

If NATO executes Article 5 of its charter, which calls for the collective defense of its members, "you won't even have time to blink your eye," said Putin. "There will be no winners."

In the speech, reported by the Daily Mail, Putin said, “I want to stress it one more time.   I've been saying it, but I'd very much want you to finally hear me, and to deliver it to your audience in print, TV and online."

"Do you understand it or not, that if Ukraine joins NATO and attempts to bring Crimea back by military means, the European countries will be automatically pulled into a war conflict with Russia?" he said.

"Of course, the [military] potential of NATO and Russia are incomparable," he added. "We understand it.  But we also understand that Russia is one of the leading nuclear states, and by some modern components it even outperforms many."

"There will be no winners," stressed Putin.  "And you will be pulled into this conflict against your will.  You won't even have time to blink your eye when you execute Article 5," the collective defense of NATO members.

Russian President Vladimir Putin (R) gestures during a joint press conference with French President Emmanuel Macron in Moscow, on February 7, 2022. - International efforts to defuse the standoff over Ukraine intensified with French President holding talks in Moscow and German Chancellor in Washington to coordinate policies as fears of a Russian invasion mount. (Getty Images)

NATO, or the North Atlantic Treaty Organization, was established in 1949 primarily to provide collective security to Europe against possible invasion by the Soviet Union. The USSR collapsed in 1991, and all Soviet troops were removed from Eastern Europe.

Commenting on NATO, Cato Institute scholar Doug Bandow said, "Russia is no Soviet Union. Vladimir Putin is no Joseph Stalin. The Russian Federation is an unpleasant actor but has reverted to a pre‐​1914 great power, insisting on border security and international respect. There is no prospect of a Russian attack on the U.S. and little more chance of one on Europe, Old or New. Although plausible, even a successful grab of the Baltic States would yield little benefit for much cost."

Conservative commentator Pat Buchanan commented last week, "Is the territorial integrity of Ukraine a cause worth America's fighting a war with Russia? No, it is not."

When NATO was created, there were 12 member countries. Today, there are 30.