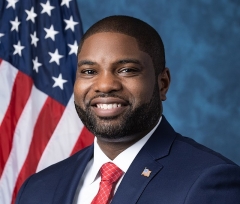 Following his recent trip to the U.S.-Mexico border, House Rep. Byron Donalds (R-Fla.) said the weak policies of the Biden-Harris administration were allowing the cartels to make about $5 billion a year in human trafficking, and that "they need to reverse their policies immediately."

"The answers aren’t down there in Guatemala because the cartel is actively recruiting," said Donalds. "They’re making about $5 billion this year trafficking people across our southern border. And so you don’t have to go down to Guatemala to know what’s actually going on."

"What’s going on is the administration’s weak policies allow the cartels to make billions of dollars," said Donalds. "It’s that simple."