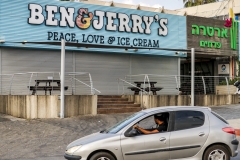 Since it decided last summer to stop selling Ben & Jerry's ice cream in the so-called occupied territories in Israel, multinational giant Unilever has seen its stock drop 20.7%, which equals about $26 billion, according to Israel Today and other media.

The stock drop apparently is the result, in part, of numerous U.S. states that have withdrawn their investments in Unilever because they have laws against boycotting Israel.

The boycott led Israeli Prime Minister Neftali Bennett to declare that Ben & Jerry's -- founded by leftists Ben Cohen and Jerry Greenfield -- had “decided to brand itself as anti-Israel ice-cream.”

Ben Cohen (L) and Jerry Greenfield, the founders of Ben and Jerry's ice cream, stand outside the White House during a climate rally in Washington, DC on November 8, 2019. (Getty Images)

Bennett also told Unilever CEO Alan Jope that the ice cram boycott would spark “severe consequences, including legal, and [Israel] will take strong action against any boycott directed against its citizens.”

Following news of the stock loss,  Israel Interior Minster Ayelet Shaked tweeted, "It doesn't pay to boycott Israel," and added the Bible verse, “I will bless those who bless you, and curse those who curse you.”

Sarah Levinson, the long-time graphics designer at Ben & Jerry's, left the company over its statement on Israel. She told Israel Today, "As a person who loves the Jewish people and the Jewish nation I could not work a single moment for a company that would join up with or appease a BDS campaign. I have good friends and working relationships with people there, but if this is what they now represent I cannot be part of it."

Ben Cohen and Jerry Greenfield claim they run "a values-led company with a long history of advocating for human rights, and economic and social justice." But while they boycott parts of Israel, they apparently have no reservations about selling their ice cream in Communist China, a totalitarian regime that has killed more than 65 million of its own people since 1950.

In 2016, Cohen supported presidential contender Sen. Bernie Sanders, a self-described socialist. Cohen has an estimated net worth of $150 million, as does Greenfield.