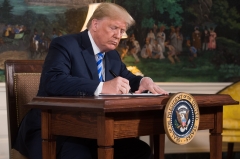 A report from The Daily Signal reveals that no funds allocated through the Paycheck Protection Program to small businesses will go to Planned Parenthood, America's largest abortion provider, a step that Rev. Franklin Graham praised as truly pro-life and indicative of the overall agenda of the Trump administration.

"Thank you President Donald J. Trump for making sure that no COVID-19 recovery funds from the Paycheck Protection Program are going to Planned Parenthood," said Rev. Graham in a May 4 post on Facebook.

"Money from this program should go to the many small businesses needing help to stay afloat because of the coronavirus pandemic," he said.

"Although there have been more than 68,000 deaths attributed to the coronavirus in the United States, more than 295,000 babies have lost their lives to abortion in the U.S. this year alone, said the reverend. No part of taxpayer money or any kind of stimulus funds should go to this organization that exists to take life, not save life."

Join me in prayer for our nation and for President Trump as he faces so many challenges and difficult decisions every day, said Rev. Graham.

During the COVID-19 pandemic, Planned Parenthood and other abortion groups have insisted that killing babies by abortion is an "essential service."

According to The Daily Signal, a senior administration official said, "President Trump is committed to ensuring Paycheck Protection Program money is used for saving jobs at small businesses, not getting the government into the business of funding abortion."