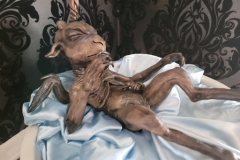 On Monday, Dec. 20, the Satanic Temple set up its diabolical Christmas-week display at the Illinois Capitol Rotunda, this year's art work being a sculpture of the demon Baphomet as a "baby demon."

Theologically, all demons were created as pure, complete spirits, angels, who rejected God's authority and chose to follow Lucifer, or Satan.

The Satanic Temple's display shows the demon Baphomet, part-man/part-goat, with long ears, horns, and perverted features. The sculpted creature was made by artist Chris Andres, and was designed apparently to celebrate the pagan holiday Sol Invictus.

According to its website, The Satanic Temple, a "religious organization, is to encourage benevolence and empathy among all people, reject tyrannical authority, advocate practical common sense, oppose injustice, and undertake noble pursuits."

The Temple is strongly active in defending abortion and promoting its legal sanction.

Bishop Thomas Paprocki, head of the Catholic Diocese of Springfield, Ill., which contains the state capital, has denounced demonic displays, saying they "should have no place in this Capitol or any other place," reported the State Journal-Register.

Satan worship "is not a religion," said Paprocki. "True religion binds people to God and to each other in faith. The devil seeks to divide, not to unite, and the only thing that Satan worship binds its adherents to is the evil one."

"Pope Francis has rightly called abortion murder and ‘hiring a hit man to solve a problem,'" said the bishop.