Seattle Police Chief: There Are 'Rapes, Robberies' and 'We're Not Able to Get to' Them 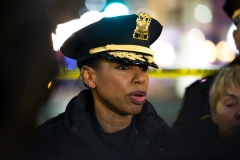 Speaking with local media on Thursday about the occupation of the police station and surrounding area by radical leftists, Seattle Police Chief Carmen Best said that police-response times had increased and that violent crimes, including rapes, were occurring but that her officers cannot get to the victims.

"Our 911, our response times have tripled in the area," Chief Best told KIRO 7.  "They've gone from just under 5 minutes to about 18 minutes."

Seattle Police Chief: "Rapes, robberies and all sorts of violent acts have been occurring in the area and we're not able to get to [them]." #capitolhillautonomouszone #antifa #BlackLivesMatter pic.twitter.com/Oe5YfVz3uL

There are "rapes, robberies, and all sorts of violent acts that have been occurring in the area that we're not able to get to," she said.

"So it is not a right for us not to be able to deploy our officers here," the chief added.

The Seattle Police Department's East Precinct building and an approximately six-block area was taken over by radical leftists, including Black Lives Matter activists, on Tuesday, June 9. The area is now called the Capitol Hill Autonomous Zone, or CHAZ.

As reported by the Seattle Times, "demonstrators hung a banner on the police station: 'THIS SPACE IS NOW PROPERTY OF THE SEATTLE PEOPLE.' Teenagers passed a bottle on the exit ramp for police vehicles. A young man carried a long rifle down the sidewalk, despite the mayor’s ban on weapons in Capitol Hill, which has not been clearly enforced."

Tensions are high in the CHAZ after some officers came in to enter the East Precinct. Some in the crowd wanted to make sure nothing happened to the officers. Others wanted to prevent the officers from entering the zone. Arguments are breaking out amongst the crowd. pic.twitter.com/uKYLrUEycl

Seattle's mayor, Jenny Durkan, apparently supports the occupation, stating that it is "a peaceful expression of our community's collective grief and their desire to build a better world."

In a June 12 tweet, President Donald Trump said, "Seattle Mayor says, about the anarchists takeover of her city, 'it is a Summer of Love.' These Liberal Dems don’t have a clue. The terrorists burn and pillage our cities, and they think it is just wonderful, even the death. Must end this Seattle takeover now!"