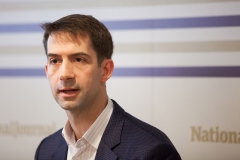 During an interview today on Fox News, Sen. Tom Cotton (R-Ark.) said the Democrats' campaign reform bill, HR1, the "For The People Act," should be called the "For the Corrupt Democratic Politicians Act" because it is designed to entrench the Democrats in power -- forever.

“Democrats call this law the For the People Act," Sen. Cotton told host Shannon Bream.  "It should be called the For the Corrupt Democratic Politicians Act because it is designed to entrench the Democrats in power."

"Look at some of the more radical proposals," he said.  "They want to turn the Federal Election Commission into a partisan commission. So, the Democrats would have a majority on that commission, and basically outlaw Republican campaigns."

"They want to provide taxpayer-funding of elections," he said. "They want your tax dollars to go to fund candidates who you oppose, sometimes in the strongest possible terms."

“They want to mandate the, kind of, reckless and untested and risky practices that so many states used last year," he added, "like mandatory ballot harvesting, where one person can go door to door and pick up thousands of ballots – a practice that is so risky, Shannon, that an entire congressional election was invalidated two years ago. An election that Republicans won, by the way."

“These are the kind of radical proposals that Democrats are hoping to leverage a slender majority and then entrench themselves in power forever," said the senator. "The American people oppose this bill and we will not let it pass in the United States Senate.”