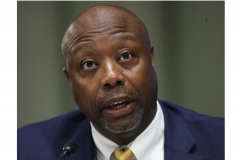 In response to leftists smearing him as an "Uncle Tim" because of his conservative beliefs, Sen. Tim Scott (R-S.C.), a black Republican, said "the left has lost their mind" and the left-wing news media are fueling a "backlash" against this "liberal oppression."

"[T]here is a coming backlash to this liberal oppression that is becoming front and center and they are not even hiding their hands anymore," said Sen. Scott on Thurday's edition of Hannity. "That's why it's so important that we stand in the gap for the nation, because the greatest comeback in American history is on its way."

Earlier in the interview, Sean Hannity asked Scott -- who delivered the GOP response to President Biden's Apr. 28 speech to Congress -- about why the Democrats are always complaining about alleged racism but then they smeared Scott with racial epithets to try to discredit his conservative message.

"The left has lost their mind today," said Scott. "It's really saddening to see that. What the left is doing is fighting bigotry with bigotry. And they have exposed their hypocrisy and their true motivation."

"I have never seen such a power grab and using people in such a despicable way," said the senator. "It is really disheartening to see the left's response, and frankly, even Twitter's response to racism and racial slurs. If it comes from the left, it must be okay according to Twitter's response 12 hours later."

Hannity then asked, "[I]n this woke cancel culture, it seems like there's very few areas where this type of intolerance is accepted. And it seems to be accepted by major news organizations.... Do you have a message to them specifically tonight?"

Senator Scott said, "Well, in my opinion, what they are fueling is a backlash. Maybe they don't realize it or not, but at some point people get sick and tired of being sick and tired, and they start reacting as opposed to responding to the criticism and the negativity."

"Fortunately for me, I've had to endure -- I've had to endure for the last couple of years as I keep coming to the conclusion that we got it right, the most inclusive economy, frankly, in American history, he said. "The last administration, President Trump, we created 7 million jobs with two-thirds going to African Americans and Hispanics and women."

Scott continued, "We saw the lowest unemployment rate. We didn't care whether you were black or white. We looked for ways to expand opportunities and give people options to make their own decisions. That's what America is about."

"And sure, we've had some challenges, but we keep rising to the occasion," said Scott.  "We confront the person in the mirror which allows us to move over.  But the left, Sean, the left refuses to do that. The left wants to find a fall guy. They want to find a scapegoat."

"As opposed to helping build a better America, what they want to do is spend $6 trillion," he said. "Where are we going to get it from? They don't care. To do what? To make sure that they have a permanent underclass. People that think they can control."

"But what I am seeing -- and I spoke to President Trump today -- what we're seeing happen is this response from good-intentioned people who happen to be black, who happen to be Hispanic, who happened to be white, who happen to be Asian, rising up and saying you won't tell me what to think. I'm going to decide that for myself," said the senator.

"So, there is a coming backlash to this liberal oppression that is becoming front and center and they are not even hiding their hands anymore," said Scott. 'That's why it's so important that we stand in the gap for the nation, because the greatest comeback in American history is on its way."

Senator Scott, 55, is the first black elected to the Senate from South Carolina. Scott grew up in poverty. His parents divorced when he was seven. His mother worked 12-plus hours a day to rear Tim and his other two brothers. Scott is an evangelical Christian.