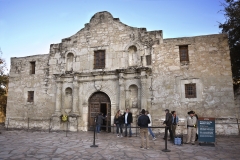 In response to spray-painted graffiti on the Alamo Cenotaph and information about potential protests at The Alamo, Texas Land Commissioner George P. Bush issued a warning, "Don't mess with the Alamo," it "will be defended."

"Don't mess with the Alamo," said Commissioner Bush in a June 13 tweet. “The Alamo is the Shrine of Texas liberty. And it will be defended."

"My office is closely watching the social media posts and rumors from protesters who are threatening to come to The Alamo," he said.

"Rest assured we have already deployed, for several weeks and will continue to do so," he added, "the Alamo Rangers in partnership with the SAPD (San Antonio Police Department, The Department of Public Safety, and the National Guard to protect this sacred site.”

He concluded, "My message to the protesters is simple: Don't mess with The Alamo."

According to Bretibart Texas, in late May, "protesters in San Antonio spray-painted graffiti on the Alamo Cenotaph. The graffiti included a downward arrow with statements of 'white supremacy,' 'profit over People' and 'the ALAMO.'"

“President Trump is the only thing standing between America and socialism,” said Bush, as reported by the Texas Tribune.  “I endorsed President Trump in the 2016 election cycle and plan to do so again in 2020."