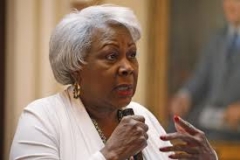 State Sen. L. Louise Lucas (D-Portsmouth), the President Pro Tempore of the Virginia State Senate, was issued a felony warrant on Monday for "conspiracy to commit a felony and felony injuring to a monument in excess of $1,000," stated Portsmouth Police Chief Angela Greene at an Aug. 17 press conference.

The criminal charges are related to the June 10 toppling of a statue at a Confederate Monument in Portsmouth, Va., where one man was severely injured when the statue fell on him.

“Several individuals conspired and organized to destroy the monument as well as summon hundreds of people to join in the felonious acts, which not only resulted in hundreds of thousands of dollars in damage to the monument but also permanent injury to an individual," said Police Chief Greene.

According to The Washington Post, "As a crowd gathered at the Confederate Monument in Portsmouth on June 10, [Senator] Lucas appeared on video taken by police telling officers that they could not arrest demonstrators, who she said were about to paint the monument. She suggested that Portsmouth City Manager Lydia Pettis Patton would back up her claim."

“'They’re going to put some paint on this thing and y’all cannot arrest them,' Lucas is heard saying on the video," reported The Post.  "'You need to call Dr. Patton because they’re going to do it. You can’t stop them. This is city property, all right. They got a right to go ahead.' An officer responds: 'Ma’am, you can’t tell them to do that.'"

"According to the video, Lucas replies: 'I’m not telling them to do anything. I’m telling you, you can’t arrest them. Call Dr. Patton,'" reported The Post.

Later, when the radical protesters tore the statue down, it landed on a man's head. Greene said the injuries were "life-altering."

"Louise Lucas is a trailblazing public servant who isn't afraid to do and say what she believes is right," McAuliffe told WTKR-TV. "Her opposition to a racist monument is the definition of what John Lewis called 'good trouble.' I stand with my good friend."