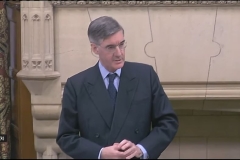 (CNS News) -- Jacob Rees-Mogg, a member of the British Parliament from Northeast Somerset, stated Monday that abortion is a “cult of death," and "should sadden us all to the depths of our souls."

Rees-Mogg addressed Parliament during debate on a petition calling for abortion rights to be included in the government’s new UK Bill of Rights. Rees-Mogg called the number of abortions taking place a “modern tragedy.”

Rees-Mogg stated that, since there was no majority agreement to change the law in Parliament, that it was not a necessary addition.

“This is about destroying life. This is the cult of death. It is the great tragedy of abortion, and it is considered normal. The extraordinarily high number of babies that are destroyed is something that should sadden us all to the depths of our souls.”

E-petition 619334 asks the British Parliament to “enshrine abortion rights in the new UK Bill of Rights … rights to abortion [are] specifically protected in this legislation.”

In order to ensure a response from the government in the United Kingdom, a petition must garner at least 10,000 signatures. If the number of signatures hits 100,000, the petition must be considered for debate in Parliament. E-petition 619334 has 167,065 signatures.

The petition was circulated after the United States Supreme Court overturned Roe v. Wade in June of 2022. The petition argues that, “Abortion rights are healthcare rights: not just for individuals who do not wish to be pregnant, but also for those who do. For ectopic pregnancies, to finish a natural miscarriage, or if mother or feotus’ life is at high risk. There are a multitude of other reasons to seek an abortion and this should be protected as a right to choose.”