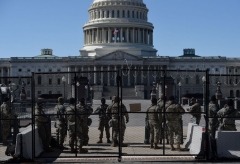 Members of the National Guard watch a checkpoint on Capitol Hill on March 5, 2021, in Washington, DC. (Photo by OLIVIER DOULIERY/AFP via Getty Images)

The National Guard Association is calling on local law enforcement in the nation’s capital to take over for National Guard troops that have been guarding the U.S. Capitol since January.

“It’s time for local law enforcement to take it from here,” the National Guard Association (NGAUS) said in a statement.

“Rather, it is a reflection of the continuing demands of training and missions back in the states on a predominantly part-time force that must always balance military duties with civilian employers and families. It is also increasingly difficult to convince Guard soldiers and airmen that their continued presence at the Capitol is warranted,” they said.

Initially, “more than 25,000 Guardsmen” were expected to be on the ground in Washington, D.C. for the presidential inauguration, the The National Guard Association of the United States said.

Both Republican and Democrat officials have expressed support for the removal of the National Guardsmen from the Capitol area.

Democrat Washington D.C. Mayor, Muriel Bowser, tweeted her opposition in late January, “1. Based on conversations with federal partners, there are some potentially volatile events upcoming that will require extra security. Fencing and the presence of troops will be a part of that. But we will not accept extra troops or permanent fencing as a long-term fixture in DC.”

The House Judiciary Republicans tweeted urging the Democrats to refocus their efforts on the Southern Border, “Tear down the wall at the U.S. Capitol. Build the wall at the southern border.”