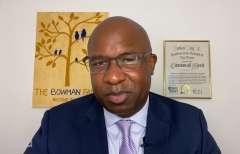 Democrat Rep. Jamaal Bowman made these claims, accompanied by calls to end the three items, in three tweets, each of which received thousands of likes.

The filibuster is a pillar upholding white supremacy. It's time to end it.

Student loan debt is a pillar upholding white supremacy. It’s time to cancel all of it.

Prior to his election, Bowman served as founder and principal of Cornerstone Academy for Social Action, a middle school in the Bronx. He is a staunch opponent of standardized testing, once branding it "modern-day slavery."