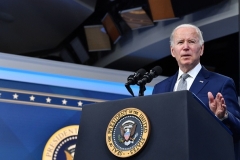 President Joe Biden speaks about his plan to fight inflation on May 10, 2022. (Photo by NICHOLAS KAMM/AFP via Getty Images)

With fuel prices at a record high, President Biden was asked on Tuesday: "Have you ever thought of your administration asking Americans to drive less, to take public transport?"

It was a simple question, but Biden never directly answered it. His response went all over the place -- from transportation options, to the infrastructure bill, to the cost of flying, to Europe's dependence on Russian oil, to "ultra MAGA" Republicans.

"Well, if you ever raised a family like mine, you don't have to tell them," Biden said in response to the question about urging people to "drive less."

"They’re doing everything in their power to figure out how not to have to show up at the gas pump.

"The vast — and that’s why — for example, one of the things that’s going to help a lot, which is going to take time, is our infrastructure bill.  The truth is they don’t have that many options, in terms of transportation, around the country right now.

"If you live in the Northeast Corridor, you do. If you’re driving back and forth between Baltimore or Washington, New York, et cetera.  But you don’t have many choices.  You don’t have a whole lot of choices to deal with other aspects of transportation in terms of local transportation.

"And so, what happens is — and unless they’re electric, we find theirselves — the cost of flying — getting — buying a ticket on a plane costs more because of gas prices. So this is a process, but it’s a process that I’ve been consistent about: wanting to lower prices for — and shift to renewable energy so we’re not as dependent.

"I have conversations almost every — well, that’s not — that’s an exaggeration — at least twice a week with one of my European counterparts, heads of state, on what — how can we help them, in fact, wean themselves off of Russian oil, because they’re so totally dependent.

"So, we’re liken [sic] like — we’re working like the devil to help them transition.  Because as long as Russia is able to make money selling oil, they’re going to continue to be able to do the bad things they’re doing.

"So, there’s a lot.  It’s really complicated.  I’m not suggesting the American people can’t understand it.  They understand it, but they have — you know, they’re working 8, 10 hours a day just to put food on the table.

With that said, Biden went on to the next question.