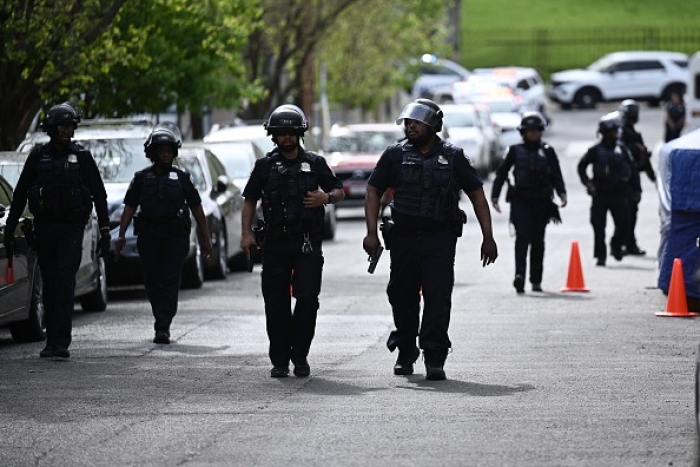 Police officers respond to a shooting in Northwest Washington, D.C., on April 22, 2022. (Photo by BRENDAN SMIALOWSKI/AFP via Getty Images)

The words "border," "immigration," and "gangs" do not appear in the Biden administration's newly released and very long fact sheet on fighting violent crime. Nor do the words "prosecute" or "states attorney," as some leftist prosecutors go easy on criminals.

Instead, the administration talks about the same-old strategies we've heard about for years, including "gun crime reduction," "community policing," "violence intervention programs," and more "educational and economic opportunities."

"President Biden believes that Americans deserve to feel safe no matter where they live," the fact sheet says. But polls show Americans are very concerned about crime and public safety, particularly in Democrat-run big cities.

It says Biden "is committed to using every tool at his disposal to fight violent crime."

On this Friday (Friday the 13th), Biden will urge state and local leaders to spend more of their American Rescue Plan funding to "make our communities safer -- and deploy those dollars quickly -- before the summer months, when many communities historically experience a seasonal increase in violent crime."

Before going home to Delaware this evening, Biden will meet with chiefs of police who have used ARA funding for public safety. After that, around 3 p.m., Biden will speak about what those state and local leaders are doing with the money Democrats gave them.

The administration points to the "comprehensive gun crime reduction agenda" that Biden issued in June 2021 -- where Biden "called on cities and states to dedicate American Rescue Plan state and local funding to proven strategies that will make our communities safer -– including by putting more police officers on the beat for accountable community policing, expanding evidence-based community violence intervention programs, and preventing crime by making our neighborhoods stronger with more educational and economic opportunities."

Biden now wants you to know that $10 billion in American Rescue Plan funds have been committed to public safety. Biden's staff says more than half the states and more than 300 communities across the country "have answered the President's call."

Republicans argued that the American Rescue Plan -- a $1.9 trillion economic stimulus bill -- was unnecessary, wasteful, inflationary, and another handout to Democrat constituencies.

On Friday, President Biden will renew his call for communities to spend more of their ARA money on crime prevention.

The fact sheet goes on to list all the ways the $10 billion has already been spent or is planned to be spent on public safety and violence prevention.