A mistake? A hack? A diversity effort? Just weird? 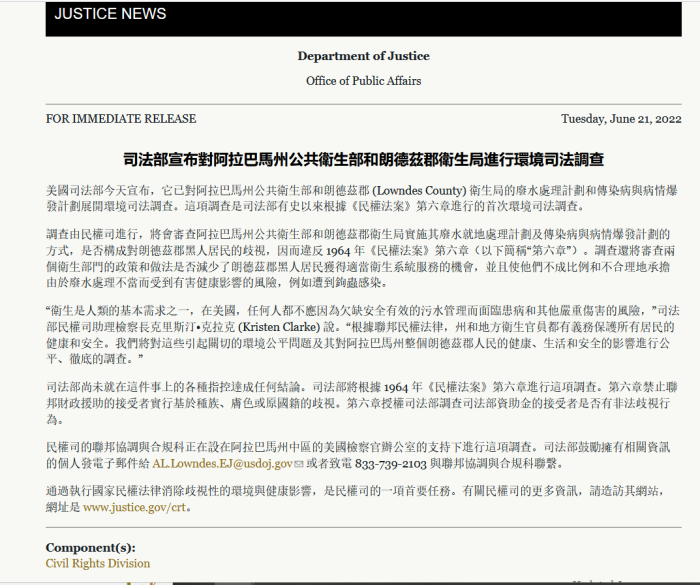 A screenshot of DOJ news release written in Chinese.

DOJ was announcing an "environmental justice investigation" of the Alabama Department of Public Health and Lowndes County Health Department," which have nothing to do with China.

According to an Internet translation service, the news release says, in English:

The investigation, conducted by the Civil Rights Division, will examine whether the Alabama Department of Public Health and the Lowndes County Health Department implemented their wastewater treatment program and infectious disease and outbreak program in a manner that constitutes discrimination against black residents of Lowndes County in violation of Title VI of the Civil Rights Act of 1964 ("Title VI"). The investigation will also examine whether the policies and practices of the two health departments have reduced access to adequate health system services for black residents of Lowndes County and placed them at disproportionate and unreasonable risk of adverse health effects, such as hookworm infection, due to improper wastewater treatment.

"Sanitation is one of the basic human needs, and no one in the United States should be at risk of disease and other serious harm because of a lack of safe and effective wastewater management," said Kristen Clarke, assistant attorney general for the Justice Department's Civil Rights Division. "Under federal civil rights law, state and local health officials have an obligation to protect the health and safety of all residents. We will conduct a fair and thorough investigation of these environmental justice issues that raise concerns and their impact on the health, lives and safety of people throughout Lowndes County, Alabama."

The Federal Coordination and Compliance Section of the Civil Rights Division is conducting this investigation with the support of the U.S. Attorney's Office in the Middle District of Alabama. The Department of Justice encourages individuals with relevant information to contact the Federal Coordination and Compliance Section by email at AL.Lowndes.EJ@usdoj.gov or by phone at 833-739-2103.

Eliminating discriminatory environmental and health impacts through enforcement of national civil rights laws is a top priority of the Civil Rights Division. For more information about the Division, please visit its website at www.justice.gov/crt.

The aberrant news release was one of four DOJ issued on June 21, and it was the only one written in Chinese: 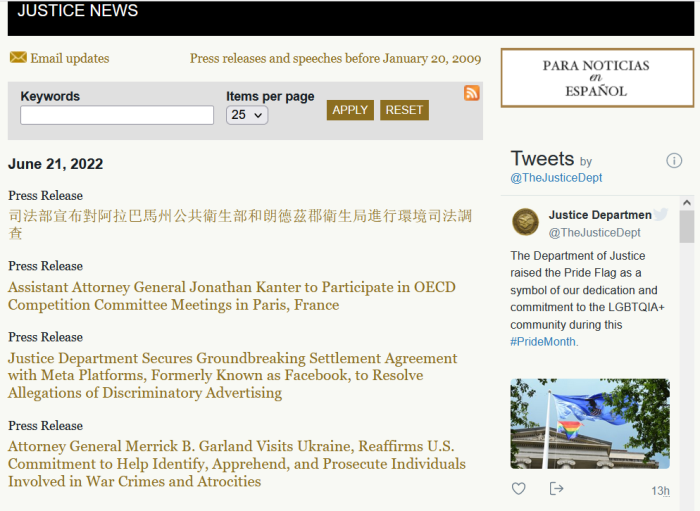