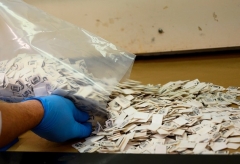 A Drug Enforcement Administration chemist pours 2,500 packs of confirmed fentanyl onto a counter for testing in New York. (Photo by DON EMMERT/AFP via Getty Images)

A Hartford magnet school remains closed for additional decontamination Tuesday, following the overdose death of a 13-year-old student and the subsequent discovery of 40 bags of fentanyl, a synthetic opioid that is 80 to 100 times stronger than morphine.

According to the U.S. Drug Enforcement Administration, the drug is flowing across the open U.S. border from Mexico.

"Mexican cartels, particularly the Sinaloa Cartel, have capitalized on the opioid epidemic and prescription drug misuse and abuse in the United States, flooding communities with illicit fentanyl and driving the record-setting rates of overdose deaths," DEA said last year, when it announced an effort to disrupt the illicit flow.

The Biden administration refuses to call the situation at the border a crisis, and it has done little if anything to address the record pace of illegal immigration, human trafficking and drug trafficking across the border.

Hartford School Superintendent Dr. Leslie Torres-Rodriguez announced on January 13 that a 13-year-old boy at Hartford's Sport and Medical Sciences Academy collapsed during gym class. The boy died in the hospital a few days later. Two other students were treated for drug exposure.

The school has been closed since Thursday, after the fentanyl was found in two classrooms and the gym.

In a letter to parents on Monday, Superintendent Torres-Rodriguez informed them that a "wipe sample" in one classroom came back with "a detectable level of fentanyl," requiring another day of decontamination.