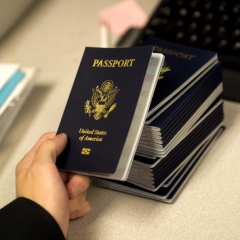 The State Department announced today it has issued the first U.S. passport with an "X" gender designation, for people who say they are "non-binary, intersex, and gender non-conforming."

The goal is to "better serve all U.S. citizens, regardless of their gender identity."

Secretary of State Antony Blinken announced in June that the department would adopt an "X" marker in addition to "M" and "F."

"We look forward to offering this option to all routine passport applicants once we complete the required system and form updates in early 2022," spokesman Ned Price said in the news release.

"I want to reiterate, on the occasion of this passport issuance, the Department of State’s commitment to promoting the freedom, dignity, and equality of all people -- including LGBTQI+ persons," Price added.

Under the policy change announced in June, passport applicants will not require medical certification to change to an "X" designation.

The State Department changed its policy, following lawsuits filed by an "intersex and nonbinary U.S. Navy veteran," who does not identify as either male or female and whose birth certificate lists the sex as "unknown."

According to Lambda Legal, which represented the intersex veteran:

"The United States joins at least ten other countries that issue passports with gender markers other than “F” (female) or “M” (male), including Australia, Bangladesh, Canada, Denmark, Germany, India, Malta, Nepal, New Zealand, and Pakistan. Most countries that offer a third marker in the sex field on passports use “X,” a gender marker option that is recognized by the International Civil Aviation Organization (ICAO), a United Nations agency that sets forth international travel document standards."

Another advocacy group, the Human Rights Campaign, commended the State Department for its new "X" option:

Winterhof said the "historic move" will "mitigate the risk of discrimination, harassment and violence faced by millions of nonbinary, intersex, and gender non-conforming Americans who travel abroad.

"The United States must encourage other governments around the world to follow suit in adopting inclusive policies that recognize and affirm non-binary, intersex, and gender non-conforming people.”