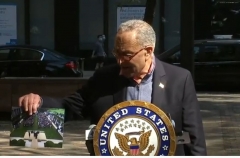 Two masked pedestrians look over at unmasked Sen. Chuck Schumer as he stands on a New York City sidewalk and displays a photo of the White House ceremony announcing the Supreme Court nomation of Amy Coney Barrett. (Screen Capture)

A maskless Chuck Schumer—the Senate Democratic Leader--stood on a sidewalk in New York City on Sunday and ranted about President Donald Trump holding a “super-spreader” event at the White House where many people in attendance did not wear masks as Trump announced the nomination of Amy Coney Barrett to the Supreme Court.

“We all know the president’s cavalier attitude towards COVID, towards masks, towards social distancing has endangered many people, including himself—as, again, this picture shows,” the maskless Schumer said as he held up a photo of the crowd outside the White House.

This video shows the maskless Schumer showing a photo of the "super-spreader" event at the White House as a couple of masked pedestrians walk past him:

As Schumer spoke for about 6 and a half minutes, numerous pedestrians passed behind him on the sidewalk. And they—unlike him—wore masks.

Some stared over at him as they passed by.

But they did not stop to listen to him speak.

This video shows a series of masked pedestrians walking by the unmasked Schumer on a sidewalk in New York City:

Schumer took to the New York City sidewalk to deliver his demands that Senate Majority Leader Mitch McConnell delay Senate Judiciary Committee hearings on the Supreme Court nomination of Amy Coney Barrett and that the administration be completely transparent about the health condition of President Trump and others who work in the White House.

Schumer also demanded to know the identity of all senators who have contracted COVID-19.

“So we are demanding today, along with millions of Americans and many, many groups, that the hearings be postponed,” Schumer said of the Barrett hearings.

“So, now, at the very minimum, we need to have full transparency,” Schumer said.

“We need to know exactly the level of the president’s health,” he said.

“When you don’t have full transparency, when there’s cover-ups, contradictory statements, even lying about something as vital to the nation’s security as the president’s health, the nation is severely endangered,” he said.

“We know that President Trump has a penchant for not telling the truth,” said Schumer.

Here is a transcript of Schumer’s unmasked statement on a sidewalk in New York City:

Chuck Schumer: “Okay, good morning everyone. Thank you again for coming and we’ll keep this short as we usually do, given the guidelines. So, we all know, of course, that the top levels of our government have been hit by the corona outbreak. We wish the president, the senators and everyone else who got corona a speedy recovery.

“But it shouldn’t be as a surprise: A new ABC poll just came out this morning. Three out of four Americans seriously doubt President Trump took the threat of COVID-19 seriously enough to his health and the American peoples’ health.

“And why might they think that: Well, look at this super-spreader photo. This is Amy Coney Barrett’s ceremony at the White House. Loads of people sitting very closely together for long periods of time with no masks, most of them.

“In fact, when they went inside, they were encouraged to take off their masks, even though being inside is more damaging than being outside.

“So, we’re here today to talk about two people who have to take COVID seriously, more seriously, and act on it. The first is Mitch McConnell. Mitch McConnell seems to be jamming through the hearings on Amy Coney Barrett even though three senators have COVID, even though he has said it’s not safe for the Senate to meet in session, but it’s okay to have the hearings. It makes no sense.

“And the idea of having virtual hearings, where no one is with the witness, for the highest court in the land, for life appointment that would have such effect on peoples’ lives, makes no sense. A virtual hearing is virtually no hearing at all. You need to be with the witness and have direct cross, cross questions and back and forth the with them.

“So for Mitch McConnell to go ahead with the hearing endangers the safety not only of senators but of staff who work diligently on the Hill and they ought to be delayed.

“There is no reason on God’s green earth these shouldn’t be delayed other than an effort to rush a witness through in an inadequate hearing where people can’t even see the witness face to face.

“So, now, at the very minimum, we need to have full transparency. We need to know exactly the level of the president’s health. We have to know who else got COVID. How severely they have it. That applies to the senators. That applies to the workers in the White House and all the top level people at the White House.              When you don’t have full transparency, when there’s cover-ups, contradictory statements, even lying about something as vital to the nation’s security as the president’s health, the nation is severely endangered. We know that President Trump has a penchant for not telling the truth. But when it comes to something as vital as this, the health of the president, the health of the people around him, we need to know the whole truth and nothing but the truth. Or, as Joe Friday said, just the facts. Just the facts, ma’am. No cover-ups, no spinning, no half-truths, the whole story.

“And we’re calling on the president to start being truthful, fully and wholly truthful about his condition and the condition of those around him.

“Did we leave anything out, Angelo?

“Okay, those are the two issues.  Questions on these two subjects.”

Question: “Senator, what procedural options would you have at your disposal that you didn’t have before because of illnesses within the Republican caucus?

Schumer: “Well, they can still go ahead with the hearings whether the Senate meets or not. Hearings can occur independent of the Senate they can occur when the Senate is out of session.

“We will have many more procedural options when it comes to a vote in the Senate committee and a vote on the floor and we will use every tool in the tool box to delay and not have the votes occur.

Schumer: “Well, we’re going to talk that over but we’re going to use every procedural tool that we can. First job: Delay these hearings. We can’t force the delay. Put public pressure on the senators both who have COVID and who don’t. We should be delaying these hearings so that we can have a full and fair hearing, not something over Zoom. That doesn’t measure up when you have the most important appointment that the Senate makes, for a lifetime.”

Question: “[Inaudible] …Have you have had any conversations with Leader McConnell about Senator testing on the Hill?"

Schumer: “I have asked McConnell repeatedly that all senators get tested and all our staffs get tested, and so far he has not gone along with it and I think he’s very, very wrong.

“Thank you everybody. Have a good day.”