Tyranny, Not COVID-19, Is America’s Most Dangerous Virus 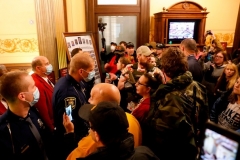 Protesters try to enter the Michigan House of Representative chamber during a protest against the governor's COVID-19 restrictions on April 30, 2020. (Photo by JEFF KOWALSKY/AFP via Getty Images)

Greetings everyone, I pray y’all are safe and healthy. If back in early March I had considered writing an opinion piece with this title, I would have been branded as an alarmist. Things have certainly changed as of late.

As we entered into this confrontation with the pandemic, I stated during a Facebook Live event that I hoped we would not take a “carpet bombing” approach in seeking solutions to protect the American people.

What do I mean? When you carpet bomb -- also known as saturation bombing -- a target, yes, you will hit the desired target, but you will also cause much collateral damage to the area. Therefore, we developed precision guided munitions for the modern battlefield.

Applying the same principle to the response to COVID-19, instead of studying actual case data and not relying on erroneous computer models, our response in America followed a carpet-bombing approach. It ended up being a collectivist, one-size-fits-all response of mandating what has become a tyrannical overreach of local and state governments. Instead of us focusing on targeting the nature of this virus and the most vulnerable, elected officials reacted with draconian measures inspired by media-driven fear, panic, paranoia, and hysteria.

Consider the facts in this matter. We firmly know, and have the empirical data showing that COVID-19 has a 99.6% recovery rate. We know that COVID-19 is most dangerous for those with underlying medical conditions such as hypertension, heart disease, COPD, Type 2 diabetes, and obesity. Those Americans over the age of 65 have been the hardest hit by COVID-19. Sadly, we have lost over 60,000 Americans, but it was just 2017-2018 when the common influenza season resulted in the loss of 61,000 Americans.

And we took no draconian measures then, nor was there an induced fear, panic, paranoia, and hysteria.

We were told that COVID-19 was different, but for the most part, it is not. It is still a virus that attacks the respiratory system. And America did not respond this way with MARS, SARS, Avian (Bird) flu, or the H1N1 (Swine) flu which affected 60 million Americans. As well, in the case of COVID-19, we clearly know that many deaths of Americans are being classified as caused by COVID-19, when there were preexisting severe health issues. COVID-19 is more of an enabler than a cause. People may be dying with COVID-19, but not because of it.

What is uniquely different about this response to the COVID-19 virus is that a more dangerous virus has evolved -- the tyranny of government.

I previously wrote a piece here for CNSNews titled “The New Normal,” going back to the declaration of New York Governor Andrew Cuomo. I have previously mentioned the April 2 quote of Rep. James Clyburn (D-S.C.), “this pandemic gives Democrats a tremendous opportunity to restructure things to fit our vision”. And then there was the Politico headline from three weeks ago, “Economic Meltdown gives Democrats new hope in Texas.” Yes, I suppose that maxim of Rahm Emanuel is ever prescient, “never let a good crisis go to waste.”

The American people were told back in March that we needed go to into a “lockdown” for two weeks to “flatten the curve.” I have always loved it when politicians come up with these soundbite references that seem so innocuous in the short term.

Well, two weeks got extended, and extended some more, and in the case of Oregon’s Governor Kate Brown, it is extended until July 6th. California’s Governor Gavin Newsome has decreed that all beaches are closed. New Jersey’s Governor Phil Murphy proudly stated that he did not consider the Bill of Rights in deciding upon his edicts, after all it is “above his pay grade.” And in Michigan, well, Governor Gretchen Whitmer has simply gone stuck on stupid.

We have seen parents being arrested for playing with their children in parks. We have seen people getting citations for driving alone in their cars -- just taking a drive. The real meaning of “lockdown” has become house arrest -- illegally implemented martial law.

The virus of tyranny has resulted in a sickness greater than COVID-19 itself, which has a 99.6% recovery rate. We have watched the American economy be decimated, all because the virus of tyranny made the decision of who and what is essential. As Benjamin Franklin asserted, “those who would give up essential liberty for temporary safety, deserve neither liberty nor safety.”

So think of this America -- a virus with a 99.6% recovery rate is not the real danger. The real dangerous virus is the utter tyranny that has made 30 million Americans unemployed.

Let me break it down to my State of Texas, where, sadly, just over 900 Texans have lost their lives related to COVID-19. We have 2 million Texans unemployed, and have disbursed some $2 billion in unemployment claims. We have an oil and gas industry that has crashed, the oil industry has lost some $1 trillion in value.

It is wrong to assume I am putting economic numbers above lives. Every one of those people who have lost their job, small business owners who have lost their livelihoods, are lives as well. And they are lives just as important, and sadly, some are taking their lives. In Montgomery County, Texas, there have been more suicides than deaths related to COVID-19.

And worst of all, there are those politicians who are seeking to exploit the situation they created for political gain…” restructure things to fit our vision.” In my home County of Dallas this Tuesday there will be a resolution offered by the progressive socialist ideologues that will allow people to claim COVID-19 as a disability -- to acquire a mail-in ballot. No, I ain’t kidding: Dallas County Commissioner John Wiley Price has introduced that resolution for vote at Tuesday’s Commissioners Court meeting.

You know what is most insidious about the virus of tyranny? Elected officials taking it upon themselves to decide who can work and what businesses can be opened. They have decided for themselves who can earn a living, while they continue to be compensated for their incompetence.

The virus of tyranny shut down economic activity, instituted house arrest, and has imparted greater harm and danger than the virus, but there is a cure. There is a vaccine against the tyranny virus, it is called Liberty. Two hundred and forty-five years ago, here in America, April 19, 1775 the Sons of Liberty found that cure. And we are seeing Americans, such as Shelley Luther here in Dallas, making a stand. Imagine, protests in California against Gov. Newsom!

COVID-19 has a 99.6% recovery rate. The virus of tyranny can only be recovered from when you inoculate yourself with the Liberty vaccine.