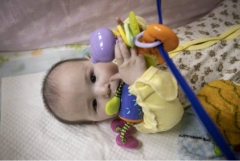 At the beginning of 2022, my pastor Theo McNair, Jr., preached a sermon entitled “There Is More.” The message encouraged me so much that I’d like to share a first quarter recap and perhaps help you prepare for what’s to come.

In January 2022 we observed the annual March for Life and the birthday of my uncle, the Rev. Dr. Martin Luther King, Jr. During this season, the Dobbs case, a controversial challenge to legal abortion in America, was in full-fledged public debate. Lt. Governor Winsome Sears was sworn into office during this time.

Dobbs v. Jackson Women's Health Organization is still a pending U.S. Supreme Court case dealing with the constitutionality of a 2018 Mississippi state law that banned abortion operations after the first 15 weeks of pregnancy.

Republican Winsome Sears, an African American who returned to Virginia politics after an absence of nearly two decades, has become the first female lieutenant governor to win statewide office in Virginia.

As February rolled in with the observance of Black History Month, the heated debate over systemic racism and CRT - aka critical race theory – continued. This debate was augmented by the surprising November 2021 wake-up call to American parents that signaled the racist and divisive underpinnings of what heretofore had seemed to be a harmless strategy to educate American children as to the state of racism in America.

Systemic racism and discrimination are real. Through the years I have experienced racial prejudice because of the color of my skin. Growing up, I was taught by the preachers in our family that God created one human race, one blood. No one can ride my back unless I bend it. The day that I was liberated from victimhood to victory was the day I opened my eyes. I’m not colorblind. I have learned to accept no less than equality as a human being and to learn to live together as brothers and sisters and not perish as an angry fool.

Although the subject of racism and culture is complicated and no approach is one-size-fits-all, questions about race and racism are interwoven into America’s history and our lives today. Parents and educators alike do our children more harm than good by ignoring the truth. We are one blood, one human race. The concept of separate races is erroneous and divisive.

We must find a constructive way to teach children about race and ethnicity that is appropriate.

Leaving February 2022, we embarked upon March, Women’s History Month. Enter the hearings on the choice of our next Supreme Court justice.

Ms. Ketanji Brown Jackson is the first black woman in U.S. history to be nominated to serve on the U.S. Supreme Court.

It's very interesting that two black women, Sears and Jackson, were highlighted throughout both Black History Month and Women’s History Month, with conversations regarding them continuing into March and beyond. Ms. Jackson has been a media darling; Lt. Governor Sears? Not so much.

As honorable mentions, my boss Brooke Rollins over at America First Policy Institute, my pastor's wife First Lady Octavia McNair at Believers’ Bible Christian Church, and my gal pal Ginger Howard, co-author of our book "We're Not Colorblind." Who are some of your favorite sheroes?

I debated over whether or not to mention the sensational event at the 2022 Oscars, but here it is. Yes, Chris Rock included remarks about Will Smith’s wife Jada in his monologue. Yes, there was a slap and a “wow!” moment. Both men apologized. The thing is folks, people are still arguing and “unfriending” each other over opinions. Add that to the COVID shot debates and the kettle is really boiling. Meanwhile, innocent people are dying in Ukraine.

Here’s the question: Is anybody praying? Is your glass half-empty or half-full? Does your cloud have a silver lining? Human dignity, human kindness, civility, and life from womb to tomb are all at stake. God help us.

Friends, time is moving on. April marks month four of a year that has already been full of surprises. Let's continue to pray that the light of truth, love, and forgiveness and the hope of humanity will shine brightly in the days ahead. My fervent prayer is that you will receive blessings, healing, and health in your spirit, soul, and body in the days ahead. Meanwhile, I will continue to speak for life, to pray for life from the womb to the tomb.