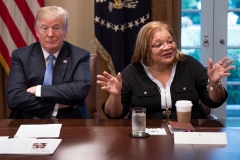 As we celebrate both Juneteenth and Father's Day, let’s also remember in prayer the U.S. SUPREME COURT. As the Supreme Court justices appointed by President Trump join in the critical Dobbs decision – may the overturning of Roe v. Wade help “we the people” on the state level grow to ensure that every unborn baby has the civil right to LIFE. Human dignity begins in the womb! After all, how can the Dream survive if we murder our children?

This week, before returning to Atlanta, I’ve celebrated Juneteenth and Fathers Day in D.C. with my America First Policy Institute (AFPI) colleague Jack Brewer (read his "Fatherhood and Second Chances") and in Nashville at Road to Majority with my friend President Donald J. Trump and the AFPI family.

As the niece of Dr. Martin Luther King, Jr., I had the honor of growing up in a family with a vibrant history of defending civil rights. As we all know, my uncle played a key role in ensuring equal rights for all of God’s children — no matter their skin tone. Our “King Family Legacy” is founded in God’s Word; with love for human dignity and for the one blood/one human race of Acts 17:26. Juneteenth and Father's Day is a great season to remember the American Dream.

While President Biden signed the Juneteenth bill, making it a national holiday, it was President Trump who put Juneteenth on the map, like I told Steve Strang of Charisma Magazine.

Juneteenth was first celebrated in 1865, two years after another Republican, President Abraham Lincoln, signed the Emancipation Proclamation. Because there were no cell phones or even telephones, news travelled slowly, and black people in Texas didn’t realize they were free until June 19th, 1865.

At any rate, Juneteenth is now a national holiday. Fathers Day is in the public eye with new fatherhood legislation in Florida, and more awareness on the national scene.

Every step towards unity for the one blood man race, from the womb brings light in the present darkness. Let us pray and ask God to bless America. Have a blessed weekend.