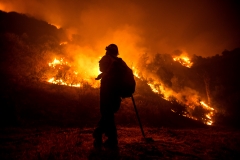 Many media outlets are blaming “climate change” for the increased number of wildfires in the western United States. For example, this article from Vox: "The West is burning. Climate change is making it worse."

When it comes to wildfires, climate change is supposedly making them larger, more catastrophic, and more frequent. Often, those stories also have a social agenda attached; we need to drive less, eat less, fly less, and buy less stuff to avoid the looming boogeyman of climate change.

But data, which doesn’t have any agenda, tell an entirely different story. More on that below.

Full disclosure. I live in California’s forested mountains. I previously lived in Paradise, Calif., the town that was burned to the ground in 2018 by the Camp Fire, due to lack of maintenance on Pacific Gas and Electric power lines. The home I owned there over a decade ago was reduced to ashes. But, “climate change” never entered my mind as a cause.

This past summer, my new Lake Almanor home was threatened by the Dixie Fire – again caused by PG&E issues, certainly not “climate change.”

The Dixie Fire is approaching one million acres burned, and is still burning two months after ignition.

California’s drought is certainly a contributing factor, though this phenomenon has been a historically continuous affliction caused by weather patterns in the Pacific Ocean.

These patterns have been occurring for millennia, and are not a feature of man-made climate change. In fact, tree ring studies of the western United States show past mega-droughts lasting as long as 200 years.

Since 1950, there have been 25 years during which Pacific weather patterns have been classified as El Niño. Conversely, there have been 24 years with patterns classified as La Niña. This bi-polar pattern is endemic to California’s natural climate cycles; wet years cause forests to flourish, and dry years often taper that growth back via wildfires. This is the balance of nature.

Forest flammability is primarily caused by the lack of water, i.e. fuel moisture. The same pattern of dryness we have experienced today also contributed to the Great Fire of 1910.

The U.S. Forest Service says this about it:

“No official cause was ever listed for the 1910 fire. But 1910 was also the driest year in anyone's memory. Snows melted early and the spring rains never came. By June, the woods were on fire in a hundred different places.”

As I said earlier, data tell a different story: in this case, it is one of unintended consequences. Increasing forest biomass, also known as “fuel load,” has been prevalent due to forest management issues. Fuel loads also figure greatly in wildfire potential and spread.

In 1990, the spotted owl was listed as endangered. As a result, the western logging industry and the associated forest management practices essentially evaporated.

Clearly, the 1990 law suppressing timber harvesting and management is correlated to the increasing amount of burned acreage. The “do not touch” policy favored by environmentalists has apparently contributed to the increase in wildfires.

"One of the reasons we're observing more fires is because of 100 years of poor Forest Service policy where we didn't allow prescribed fire or wildfires to burn," says Dr. Craig Clements, a San Jose State University meteorology and climate science professor and director of the school's Fire Weather Research Laboratory.

It seems clear to me that poor forest management, not climate change, has led to this ever-expanding wildfire devastation afflicting California and much of the West. It is also clear the practice of leaving federal forests unmanaged will result in continued catastrophic wildfires in the western United States.

Anthony Watts is a senior fellow for environment and climate at The Heartland Institute. Watts has been in the weather business both in front of, and behind the camera as an on-air television meteorologist since 1978, and currently does daily radio forecasts. He has created weather graphics presentation systems for television, specialized weather instrumentation, as well as co-authored peer-reviewed papers on climate issues. He operates the most viewed website in the world on climate, the award-winning website wattsupwiththat.com.