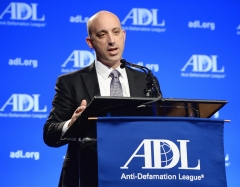 The next national director of the Anti-Defamation League, Jonathan A. Greenblatt, speaks onstage at the morning session of the ADL Annual Meeting on Nov. 6, 2014. (Photo credit: Michael Kovac/WireImage)

After Derek Chauvin was found guilty of the murder of George Floyd, many organizations and celebrities issued press releases that went beyond celebrating justice, offering blanket condemnations of the police as universally racist and oppressive.

For instance, Seventh Generation, the Unilever-owned laundry detergent maker, tweeted that "stopping the continued killing of Black and Brown people at the hands of the police demands we divest from police....It’s imperative we divest from systems of harm.” The NBA’s LeBron James tweeted what appeared to be a threat (since deleted) toward the Columbus, Ohio police officer involved in the fatal shooting of 16-year-old Ma’Khia Bryant as she assaulted another person with a knife.

While I have come to expect this kind of anti-police rhetoric from the corporate world and celebrities, I was dismayed to see leading civil rights organizations also lending their voices to false claims about police.

As a police officer of almost 18 years, I understand the importance of conscientious and impartial policing. And as a third-generation Jewish American whose grandparents were forced to flee the rise of the Nazi Party, I have personally benefited from the hard work of civil rights organizations that champion vulnerable groups against discrimination and abuse.

When my grandfather, a Czechoslovakian, came to America after serving in the British army in World War II, there were still several anti-Jewish policies in place. Several prominent universities capped the enrollment of Jews well into the late twentieth century, and Yale didn’t have a Jewish full professor until 1946. Country clubs restricted Jews, blacks, and women from membership until the 1990s. Jews in America also faced many acts of violence. It was the civil rights organizations that stood up for us.

During my career, I have participated in training classes and used publications put out by both the Anti-Defamation League (ADL) and the Southern Poverty Law Center (SPLC). I know firsthand that these organizations value their partnerships with law enforcement. Yet this history didn’t stop either of these organizations from painting every police officer with the same broad brush.

Every time a police officer takes a life, it is a sad and traumatizing event for everyone involved. But it is not, as the ADL contends, evidence of a system that “target[s] and devalue[s] Black, brown, and Indigenous lives for centuries.” An ADL press release opined that Adam Toledo, the 13-year-old shot by Chicago police, was killed because of “systemic racism,” not because police were responding to the presence of an armed individual fleeing the scene of a “shots fired” call. The shooting was tragic, but it wasn’t the result of systemic racism, and a group that seeks justice when churches are burned should know that.

The SPLC has done no better. Their recent press release lionizes Tony McDade, a black transgender man shot and killed by a Tallahassee police officer last May. McDade, a suspect in the stabbing death of Malik Jackson, pointed a handgun at police when approached, leaving the officers no choice but to shoot him. Investigators at the scene recovered a handgun, along with the bloody knife used to kill Jackson. Body camera footage corroborated the officers’ version of events, and a Leon County grand jury found that the use of force was justified. But none of this prevented the SPLC from citing McDade’s death as evidence of a “criminal legal system built on anti-Black racism and white supremacy.”

Many other civil rights organizations, including the American Civil Liberties Union, which believes that “racism...pervades law enforcement,” put out similar damaging statements.

Comments like these, which extend far beyond these organizations’ primary mission to advocate for vulnerable communities, will further erode the already-fraught relationships between police and their communities. By falsely tarring the entire policing profession with the bogus charge of systemic racism, these groups weaken their ability to help true victims of civil rights abuses—and endanger the relationships they have built with the large majority of sincere and hardworking cops who are their allies in championing justice for all.

Ari L. Maas is an 18-year law enforcement professional and is an attorney licensed in both New Jersey and New York.

Editor's Note: This piece originally appeared on The City Journal.