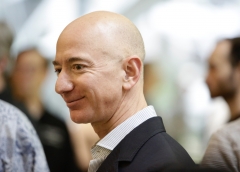 Chief Executive Officer of Amazon, Jeff Bezos, tours the facility at the grand opening of the Amazon Spheres, in Seattle, Washington on January 29, 2018. (Photo credit: JASON REDMOND/AFP via Getty Images)

Hannity later clarified that his soliloquy to Bezos' billions was not aimed at Tucker, but was rather a defense of “honest capitalism.” Yet this begs the question: is Amazon "honest capitalism?"

The answer is no. Amazon operates multiple monopolies and unfairly stifles competition. It uses its incredible power to crush smaller companies and ensure they can never compete against the tech giant. It also censors conservatives and relies on Chinese child labor.

This is not the free market competition conservatives should support.

During the coronavirus epidemic, Amazon claimed it prioritized essential products on its various services. Unsurprisingly, the critical products Amazon prioritized happened to be Amazon’s own. Amazon products were advertised with faster delivery times while the quicker delivery times of third-party sellers were hidden. Bezos’ behemoth claims this was an honest mistake caused by its algorithms, but isn’t it funny this mistake benefited Amazon?

Amazon Prime is the second-largest video streaming service in the world and Amazon Fire is in fierce competition to be the number one streaming stick service in America. It’s estimated that 57 percent of the American streaming stick market is controlled by Amazon. Amazon Fire, despite being one of the largest services, blocks WarnerMedia’s HBO Max and NBCUniversal’s Peacock from its platform. According to Variety, Amazon blocks these services because they compete with Prime. This shows Amazon does not want to be solely a distributor and only wants to favor its own services.

These cases demonstrate how Amazon weaponizes its monopoly power to crush smaller competitors. A streaming platform can’t compete against Prime if it isn’t available on the most popular streaming stick service in America. Companies that sell essential goods can’t compete against Amazon when Amazon only prominently features faster delivery times for its own products.

Competition is crucial to honest capitalism -- but Bezos doesn’t seem interested in this concept.

Conservatives should particularly worry about the tech behemoth censoring right-leaning viewpoints and media. Amazon’s Twitch banned Donald Trump, the president of the United States, from its platform in June over “hateful conduct.” Twitch claimed Trump’s famous 2015 comments about illegal immigrant rapists and his remarks about “tough hombre” criminals at his June Tulsa rally constituted “hateful conduct.” This justification is ridiculous and amounts to viewpoint discrimination against millions of conservatives.

Amazon Prime censored the popular documentary "Hoaxed" in April. The documentary was made by right-wing personality Mike Cernovich and criticized the mainstream media. "Hoaxed" was in Prime’s top 50 documentaries prior to its removal. It’s not a huge mystery why Bezos, who owns The Washington Post, may not want to feature a documentary that skewers the media from a right-wing perspective.

Perhaps most disturbingly, Amazon profits from Chinese supply chain factories, which reportedly rely on forced labor. Many of these slaves are Uighurs and other persecuted minorities. A 2019 investigation revealed that Amazon's Echo and Kindle were produced by Chinese schoolchildren working overnight. Is it honest capitalism to utilize child and slave labor to undercut American manufacturers who pay their workers a living wage?

No conservative is opposed to people making a lot of money the honest way. American prosperity is due to the entrepreneurship and free market competition of its citizens. Yet we should question when one man amasses so much wealth and power with unfair business practices. Monopolies built on forced labor do not represent the American way.

Bay Buchanan is a conservative activist, author, and pundit. She served as U.S. treasurer in the Reagan administration and then as a senior adviser to Pat Buchanan, Tom Tancredo, and Mitt Romney.