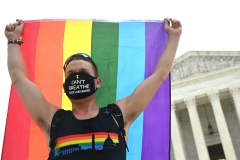 June marks LGBTQI+ Pride Month — a month honoring those who are "lesbian, gay, bisexual, transgender, queer, and intersex." This ever-expanding rubric revolves around a particular value system entirely embraced by the modern Left: the notion that a person's core identity ought to lie not in the relationship between individual desires and societal duties, but instead ought to revolve around a subjective sense of self, unverifiable by the world at large and justified against all societal roles and rules.

President Joe Biden has said as much from the White House. In a proclamation urging Americans to "wave their flags of pride high" — it is worth noting that an entire side of the political aisle in the United States now finds the so-called pride flag far less controversial than the American flag itself — Biden stated, "This month, we remind the LGBTQI+ community that they are loved and cherished. My administration sees you for who you are — deserving of dignity, respect, and support."

Of course, seeing people for who they are typically requires some sort of objective standard; it is literally impossible to see someone for who he is based on his own internal self-perception. This means that Biden is using perfectly Orwellian euphemisms to say that we all ought to validate the self-perception of any he, she, xe, or catself.

This perspective is absolutely incoherent. Ironically, this incoherence is exposed by the conflict between the different letters within the alphabet soup of the supposedly sexually marginalized. The case for tolerance of lesbian and gay Americans used to be that biological drives should not be regulated by society at large, because such drives were inborn and innate; that idea at least had the merit of internal consistency. Now, however, that idea has been jettisoned for its logical opposite, the belief that biology has no hold on us whatsoever, and that we ought to be free to define ourselves in opposition to our own biology, changing our gender and sexual orientation at will. Homosexual orientation relies on the continued distinction between the sexes — after all, why prefer males or females if those sexes are mere social constructs? Transgenderism relies on the absolute malleability of sex. This is the reason that so-called TERFs — "trans-exclusionary radical feminists" — are so bewildered by the suddenly mainstream view that women's rights ought to be extended to biological men.

And yet here we are, told by the White House that we must ignore the internal contradictions of left-wing sexual ideology, and simply pretend the incoherence away. We are told that we ought to stand for women's rights by the same people who insist that Lia Thomas is a woman; we are told that one need not be a biological female to be a lesbian; we are told that biology dictates behavior, but that biology must never be used as an identifier. None of this makes one whit of sense. But we ought to be proud of it, because after all, it liberates us to celebrate our inner sense of authenticity, free of society's strictures.

There is only one problem, of course: this sort of illogic quickly devolves into anarchy. There is no way to speak coherently with one another absent objective meaning, let alone to reach consensus. Suggesting that the world at large owes each of us validation for our innermost desires is a recipe for complete chaos. Unity can only come from opposition to something — and in this case, that means opposition to tradition, institutions, and the roles that actually facilitate human flourishing.

Ben Shapiro, 38, is a graduate of UCLA and Harvard Law School, host of "The Ben Shapiro Show," and editor-in-chief of DailyWire.com. He is a three-time New York Times bestselling author; his latest book is "The Authoritarian Moment: How The Left Weaponized America's Institutions Against Dissent."