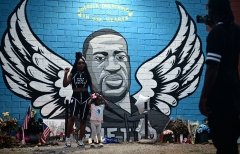 People stand in front of a mural of George Floyd in Houston, Tex. on June 8, 2020. (Photo credit: JOHANNES EISELE/AFP via Getty Images)

In and of itself, the Chauvin case never should have been a national news story. After all, an average of three suspects are shot by police every day in the United States, and thousands of homicides that have nothing whatsoever to do with the police take place in the United States every year. Theoretically, national news stories should be indicative of profound national problems, not man-bites-dog statistical rarities.

But, of course, that was the entire point of elevating the George Floyd story to national attention: to declare it indicative of a deeper rot at the core of America. Thus, Chauvin was convicted not of his individual criminal activity, but of a charge that was never even brought against him: the charge of racism. As Minnesota Attorney General Keith Ellison admitted, there was no evidence whatsoever that Chauvin was a racist, or that his killing of George Floyd was motivated by race.

"We don't have any evidence that Derek Chauvin factored in George Floyd's race as he did what he did," Ellison ruefully told incredulous "60 Minutes" host Scott Pelley. And Pelley, speaking for the entire establishment media — a left-wing bubble thoroughly invested in the narrative of systemic American racism — responded, "the whole world sees this as a white officer killing a black man because he is black."

Pelley isn't wrong. In the end, evidence for systemic racism is utterly unnecessary. Systemic racism requires no evidence of intent, either individual or systemic. It requires only evidence of disparate outcome by race. Which is why Ellison explained that even though he couldn't charge Chauvin with a hate crime, he could charge the entire system with racism in the Chauvin case:

In order for us to stop and pay serious attention to this case and be outraged by it, it's not necessary that Derek Chauvin had a specific racial intent to harm George Floyd....People of color, black people, end up with harsh treatment from law enforcement. And other folks doing the exact same thing just don't.

Now, statistically speaking, this is simply untrue. In late 2020, the Bureau of Justice Statistics released a report that found no statistically significant difference by race between criminal activity and arrest — in other words, you get arrested in America if you are reported to have committed a crime, no matter your race. Multiple studies, from Harvard's Roland Fryer to professor Peter Moskos of John Jay College of Criminal Justice at City University New York, show that police officers are less likely to kill black Americans than white Americans in similar circumstances.

And that's precisely the point. Systemic racism is a fundamentalist religious belief. It posits original sin; it posits saints and prophets; it posits its own malevolent god of the gaps. Most of all, it persecutes heretics in the name of a supposedly higher good. To be saved is to declare fealty to radical racial polarization; to be damned is to deny such fealty.