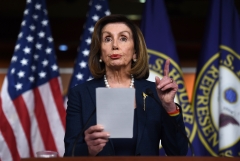 In 2022, Jan. 6 will be commemorated with all the ballyhoo and rigmarole Democrats and their media allies can muster.

CNN plans an entire special around the anniversary, titled "Live from the Capitol: January 6th, One Year Later;" the show will feature the "heroes who protected our democracy in the face of an insurrection," and will include interviews with such luminaries as House Speaker Nancy Pelosi (D-CA) and January 6 Committee Chair Bennie Thompson (D-MS). President Joe Biden and Vice President Kamala Harris are also expected to commemorate Jan. 6 with special remarks and Pelosi has organized a bevy of events in memory of the riot.

Now, you might ask yourself just why Jan. 6 merits such outsized attention. One need not downplay the events — the horrifying image of rioters bashing police officers with metal poles, storming through the halls of Congress shouting for Mike Pence — in order to recognize Jan. 6 for what it was: an ugly but not pivotal moment in American history. The event resulted in one direct death — rioter Ashli Babbitt was shot by a Capitol police officer — and some $1.5 million in property damage to the Capitol building; the Capitol was cleared within hours of the riot and Vice President Mike Pence and Senate Majority Leader Mitch McConnell promptly presided over the certification of the 2020 election. Those who broke into the Capitol or even trespassed have ended up in jail.

Meanwhile, by contrast, the Black Lives Matter riots of 2020 resulted in some $2 billion in insured property damage (and likely billions more in uninsured property damage), two dozen people died, and the resultant political movement against the police led to an unprecedented nationwide spike in homicides in major cities. To date, there have been no commemorations from CNN, speeches from Biden or Harris, or a day honoring the police officers who held rioters in check.

So, what lies behind the Democratic-media obsession with Jan. 6? Political opportunism. Democrats aren't even hiding the ball. Facing the ever-likelier prospect of a 2022 midterm wipeout, Democrats have hit on a strategy: they have to rig the electoral rules and overthrow traditional democratic institutions in order to stop Republicans from rigging the electoral rules and overthrowing traditional democratic institutions. Jan. 6, to opportunistic Democrats, is the all-purpose excuse to use the entire weight of their party to push for a radical revision of Senate rules and federal elections. As Politico reported Monday, "Democrats are hoping that Thursday will be more than just a day of remembrance. In the Senate, we hear from well-positioned sources, there's a desire to take the opportunity to supercharge the party's long-stalled voting rights legislation — possibly even using the anniversary to try to get Sens. Krysten Sinema (D-AZ) and Joe Manchin (D-WV) to go nuclear on the filibuster or embrace rules changes."

Yes, the electoral village must be burned in order to stop future events similar to Jan. 6. As The New York Times editorialized, "Every Day Is January 6 Now," arguing, "the Capitol riot continues in statehouses across the country, in a bloodless, legalized form that no police officer can arrest and that no prosecutor can try in court." The only plausible response is to federalize election procedures constitutionally given to the states, to mandate the corrupt practice of ballot harvesting, to mandate long periods of early voting and universal absentee ballots, to loosen voter verification, and much more.

Or, perhaps, because Democrats can read the writing on the wall. They know that November 2022 cometh, and that right soon. And they hope that if they invoke the specter of Jan. 6 repeatedly, Americans will shrug and allow them to usurp authority, violate rules, and rewrite voting procedure. It won't work. But it should reveal to Americans just who Democrats are, and how little they actually care about Jan. 6 in the first place.