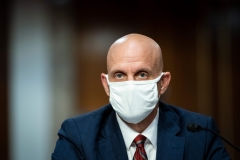 Over the course of the COVID-19 pandemic, the media have spilled barrels of ink over mistakes by the federal government. We've heard endlessly about the failure to quickly ramp up testing, the confusion over mask-wearing, and the debates over proper lockdown policy. But when the history of this time is written, the fundamental mistake made by the United States government won't be rhetorical excesses by the president or conflicting public health advice. It will be the same mistake the government always makes: trusting the bureaucracy.

We now know that the miraculous Moderna vaccine for COVID-19 had been designed by Jan. 13, 2020. That was just two days after the sequencing of the virus had been made public. As David Wallace-Wells writes for New York magazine, "the Moderna vaccine design took all of one weekend....By the time the first American death was announced a month later, the vaccine had already been manufactured and shipped to the National Institutes of Health for the beginning of its Phase I clinical trial."

Meanwhile, for six weeks, Dr. Anthony Fauci assured Americans that there was little to worry about with COVID-19.

Fast-forward to the end of 2021. Hundreds of thousands of Americans have died. Tens of thousands of Americans continue to die every week. The Food and Drug Administration has still not cleared the Oxford-AstraZeneca vaccine, which costs a fraction of the other vaccines (about $4 per dose, as opposed to $15 to $25 per dose for Moderna's vaccine or $20 per dose for the Pfizer-BioNTech vaccine). The FDA approval process cost us critical months, with thousands of Americans dying each day. As Dr. Marty Makary of Johns Hopkins University told me this week, "safety is their eternal excuse. They are entirely a broken federal bureaucracy....Why did we not have a combined Phase I-Phase II clinical trial for these vaccines?"

This is an excellent question, of course. Phase I trials involve small numbers of participants, who are then monitored. Phase II trials involve larger numbers. Huge numbers of Americans would have volunteered for a combined Phase I-Phase II trial. And even after we knew the vaccines were effective, the FDA delayed. Data was collected by late October that suggested Phase II/III trials had been successful. The FDA quickly requested more results, which it did not receive until November. It then took until Dec. 11 for the FDA to issue emergency use authorization for the Pfizer vaccine. The Moderna vaccine wasn't cleared until Dec. 18, nearly a year after it had first been produced.

The disgrace continues. The government continues to hold back secondary doses of the vaccine, despite the fact that the first doses provide a significant effect. As Makary says, "we're in a war. The first dose gives immunity that may be as high as 80 to 90 percent protection, and we can probably give half the dose, as Dr. Moncef Slaoui suggested....We can quadruple our supply overnight."

Meanwhile, states continue to be confused by the Centers for Disease Control and Prevention guidance on how to tranche out the vaccines. It took until nine days after the FDA authorized the Pfizer vaccine for the CDC to release its recommendations. Those recommendations were still complex and confusing and often rife with self-defeating standards — even though it was perfectly obvious from the start that the solution ought to be based on age.

Americans have relied on the government — a government supposedly comprised of well-meaning experts — to get us through a pandemic. The government not only failed with conflicting information and incoherent lockdown policy, but also actively obstructed the chief mechanism for ending the pandemic thanks to bureaucratic bloat. If Americans' takeaway from the COVID-19 pandemic is that centralized government is the all-purpose solution, they're taking precisely the lesson most likely to end in mass death in the future.