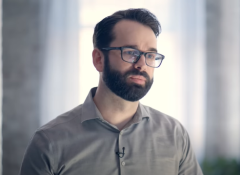 Conservative pundit Matt Walsh conducts an interview in "What Is a Woman?" (Photo credit: YouTube/Matt Walsh)

This week, my company, The Daily Wire, premiered a blockbuster new documentary starring Matt Walsh. Titled "What Is A Woman?", the documentary investigates radical gender theory and its peculiar hold on the elites in our society — and how the insane proposition that men can become women and vice versa has become so well-accepted that even normal Americans now live in fear of questioning it. The film has been the single largest success in the history of The Daily Wire; hundreds of thousands of Americans have subscribed to view it. Yet Rotten Tomatoes, the review aggregator for film and television, has not a single traditional review of the film.

That's because, according to the legacy and entertainment media, the film doesn't exist. When the Daily Wire press team sent out invitations to reviewers to watch the film — knowing, of course, that the vast majority of reviewers are left-leaning and would undoubtedly pan the film — reviewers began responding with insults and declarations of preemptive hatred. "Hard pass," wrote one. "Unsubscribe," wrote another. "Lose my email. Forget my name." A third reviewer, this one a member of GALECA: The Society of LGBTQ Entertainment Critics, wrote, "Hard f***ing pass. I won't give that transphobic bigot a platform on my site. Never email me again!" Thus, the current Rotten Tomatoes audience score for the film is 96%; the reviewer score remains empty.

Reviewers' willingness to pretend that there is no controversy with regard to gender and sex perfectly reflects the Left's beliefs about transgender ideology more broadly. One gender reassignment surgeon — a medical doctor who performs body-mutilating surgeries — told Walsh that nobody believed in traditional ideas about biological sex anymore; only "dinosaurs" would believe such antiquated notions.

Such denial of the mere existence of a countervailing argument is a common feature of the Left these days. The idea is that by pretending opposition to bizarre ideas doesn't exist, you can mainstream those bizarre ideas. Thus, "everyone believes" that climate change is not merely a byproduct of human activity, but that it threatens life on earth; to deny the latter proposition is tantamount to Holocaust denial. "Everyone believes" that America is systemically racist; to do otherwise is to mark yourself as a bigot.

But what if everybody doesn't believe such propositions? What if there are millions of Americans — the majority of Americans, in fact — who believe precisely the opposite? Then the only option is to reinforce denial with censorship. Which is why former Barack Obama senior adviser Dan Pfeiffer went on the air at MSNBC to declare the very popularity of conservative viewpoints a threat to democracy.

"Right wing content," Pfeiffer observed, "dwarfs progressive content [on Facebook]. It dwarfs mainstream media content, which actually should be the part that scares us the most, that Ben Shapiro's Daily Wire has more followers and engagement, many times more than The New York Times or CNN...that is a problem for democracy."

There's only one problem: it won't work. Democrats have siloed themselves into an increasingly progressive universe, one in which the most controversial imaginable propositions are utterly uncontroversial. In this universe, the other side doesn't exist. Unfortunately for the Left, the other side does exist. And they vote. And come November 2022, the ostrich strategy of the Democratic Party and its media apparatchiks is likely to bear devastating electoral fruit.

Ben Shapiro, 38, is a graduate of UCLA and Harvard Law School, host of "The Ben Shapiro Show," and Editor-in-Chief of DailyWire.com. He is a three-time New York Times bestselling author; his latest book is "The Authoritarian Moment: How The Left Weaponized America's Institutions Against Dissent."