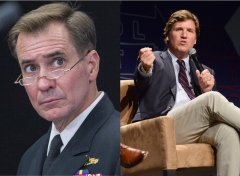 Carlson had committed the great sin of pointing out the oddity of the fact that the Biden White House had been promoting brand-new uniforms for pregnant soldiers, rather than America's military efficiency in the face of a rising Chinese military threat. This prompted spasms of apoplexy from top brass in the military itself: Pentagon spokesperson John Kirby said that the Pentagon was filled with "revulsion" at Carlson's comments, adding, "We absolutely won't just take personnel advice from a talk show;" Army Sgt. Maj. Michael Grinston tweeted that women "will dominate ANY future battlefield we're called to fight on," calling Carlson's words "divisive;" Marine Corps Master Gunnery Sgt. Scott H. Stalker, the senior enlisted leader of the U.S. Space Command, said that Carlson's opinion was "based off of actually zero days of service in the armed forces."

Now, the military itself recognizes that pregnant women can't exactly staff front-line positions. At 20 weeks of pregnancy, pregnant soldiers in the Army are exempt from field duty, deployment, wearing individual body armor, standing at parade rest or attention for longer than 15 minutes, or participating in weapons training; upon diagnosis of pregnancy, all pregnant soldiers are exempt from regular physical fitness training.

And the military has reported in the past that mixed units underperform all-male combat units. In 2015, a yearlong Marine Corps report found that, according to NPR, "all-male units were faster, more lethal, and able to evacuate casualties in less time."

But the content of Carlson's words was less important than the reaction to them, for it was unprecedented for top members of the military to unite in excoriating a civilian opinion journalist. Had it happened on former President Trump's watch, the media undoubtedly would have used it as an example of politics infusing traditionally apolitical institutions. Dark buzzwords like "authoritarian" and "fascist" would have been tossed around casually. Yet when the military was mobilized to attack Carlson, the media cheered instead.

We are watching in real time America's institutions being gutted on behalf of left-wing politics. Formerly apolitical institutions are being remolded top-down to reflect the values of our New Ruling Class: those who speak the wokeabulary, who believe in the tyrannical and polarizing theories of Ibram X. Kendi and Kimberle Crenshaw, who see their roles as the social engineers of their fellow Americans. This is true in our universities; it's true in our colleges; it's true at our corporations; and now it's true in the American military. No wonder we're told that our military will somehow be stronger for tossing out gender-neutral physical fitness tests, or paying for transgender surgeries, or forcing soldiers to read the asinine musings of critical race theorists.

Our military is designed to deter and to defend, to kill people and break things. If diversity facilitates that mission, that's wonderful. But to supplant the military's chief mission with the woke protocols of the political left is to undermine that chief mission. The world is a dangerous, ugly, competitive place. If our masturbatory woke solipsism blinds us to that reality, the cost will be quite real — far more real than any supposed threat emanating from the musings of Tucker Carlson.