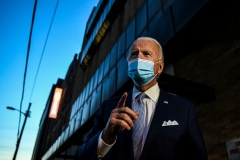 Joe Biden talks to the media outside the Queen theatre after announcing the new members of his potential cabinet. (Photo credit: CHANDAN KHANNA/AFP via Getty Images)

For four years, we heard that President Donald Trump is a threat to freedom of the press. The Washington Post signaled its own faux bravery by adopting the slogan "Democracy Dies in Darkness" at the top of its masthead. CNN began running commercials about facts being facts, and apples being apples rather than bananas (unless, presumably, those apples identify as bananas). The New York Times championed its own supposed stunning intrepidity in covering the Trump administration.

Those four years followed eight years during which the sitting president of the United States, Barack Obama, treated the press as lapdogs. He fed them occasional treats; they licked his hand. He occasionally disciplined them; they learned silence. He asked them to bark on cue; they did. During the Obama era, scandals went underreported; egregious seizures of power were portrayed as inevitable byproducts of Republican intransigence; and Obama's political opponents were treated as deplorable remnants of historic American bigotry.

With the elevation of Joe Biden as president-elect, prepare for some hard-hitting deja vu.

To be fair, the extent of the media's lapdogging for Biden became clear throughout the election cycle. President Donald Trump was presented as the single-greatest factor in the rise of COVID around the nation. Barrels of ink were spilled over his supposed support for white supremacy. Reams of paper were wasted claiming that Trump presented a threat to the integrity of the election itself.

Biden, meanwhile, answered few, if any, difficult questions during the entirety of his campaign. In fact, when the New York Post reported on the contents of a laptop purportedly owned by Hunter Biden — emails and texts that spell out the possibility that Joe Biden knew about Hunter's nefarious global business activities trading on the Biden name — the media immediately worked to shut down the story. NPR announced it wouldn't cover the story, with managing editor Terence Samuel stating, "we don't want to waste our time on stories that are not really stories, and we don't want to waste our listeners' and readers' time on stories that are just pure distraction." Social media quickly came to heel, with Twitter banning the Post's account for weeks and Facebook announcing it would suppress distribution of the story.

Just a few weeks after the election, news broke that Hunter Biden had been under some form of federal investigation since 2018. Now the media see fit to cover Hunter's business activities — but only from the angle that his activities may provide some sort of challenge for his father's administration.

Meanwhile, the establishment media rush to defend Jill Biden from the supposedly cruel predations of a Wall Street Journal op-ed columnist who noted — correctly — that she should stop using the title "doctor," since she has an Ed.D., a doctorate in education, from the University of Delaware. That rather uncontroversial notion was met with a paroxysm of rage from the usual media suspects, many of whom deemed it misogynist.

It's no wonder that after Joe Biden's Electoral College victory speech, the man himself sneered at Fox News reporter Peter Doocy for asking him about Hunter.

"Thanks for the congratulations," said the supposedly avuncular Biden sarcastically. "Appreciate it."

It wasn't Doocy's job to congratulate Biden. It was his job to ask Biden tough questions. But Biden could be forgiven for thinking otherwise. After all, the media have spent years demonstrating that they represent the public relations wing of the Democratic Party, rather than acting as the staunch guardians of objective truth they purport to be.

Ben Shapiro is a graduate of UCLA and Harvard Law School, host of "The Ben Shapiro Show" and founder of The Daily Wire. He is The New York Times best-selling author of "Bullies." He lives with his wife and three children in Los Angeles.