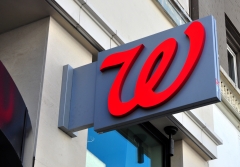 This week, a video from a San Francisco Walgreens went viral on Twitter. The video depicted a man standing next to his bicycle, loading up a garbage bag with products. The man then rides his bicycle down the aisle, past a security guard, who limply throws out a hand to try to grab the bag; the shoplifter simply brushes past him, then rides out the door.

This sort of thing has become exceedingly common in San Francisco. In late May, Thomas Fuller wrote in The New York Times, "At a board of supervisors hearing last week, representatives from Walgreens said that thefts at its stores in San Francisco were four times the chain's national average, and that it had closed 17 stores, largely because the scale of thefts had made business untenable." Employees at Walgreens had been told to stand aside as shoplifting took place because security officers had been assaulted repeatedly.

This just happened at the @Walgreens on Gough & Fell Streets in San Francisco. #NoConsequences @chesaboudin pic.twitter.com/uSbnTQQk4J

All of this is the result of a 2014 California ballot measure that reclassified nonviolent theft as a misdemeanor, so long as the thief took less than $950 worth of material. Thieves quickly hit on a strategy: Hit up different stores for less than $950 worth of stuff. Then, amid the Black Lives Matter protests and riots of 2020, San Francisco decided to crack down on the police. Mayor London Breed announced that booking photos would no longer be released, lest the prevalence of black and brown faces lead to stereotyping; she announced a $120 million cut to the police and sheriff's department over the next two years, in the interest of "prioritizing investments in the African American community;" in the first six months of 2020, 23 officers resigned from the force.

Property crime has skyrocketed. It's not just shoplifting: burglaries increased nearly 50% year-on-year in 2020 and car theft jumped 34%. Meanwhile, the streets are littered with garbage, and have been for years thanks to lax law enforcement. In 2018, a survey of 153 blocks in downtown San Francisco showed trash on every block, 41 blocks "dotted with needles" and 96 blocks with open human feces.

This form of governance has become all too common. Los Angeles, my hometown, has steadily declined in terms of livability. Suburban areas have been inundated with homeless vagrants, often openly shooting up, while the police have been directed to do nothing; Venice Beach has become an enormous open-air homeless encampment. Seattle has morphed from the Emerald City into a refuge for those living on the street, regardless of the risks to other citizens.

There is a reason why Americans are fleeing America's major cities. The problem predated COVID-19, and it will post-date it, too. Americans like having a Walgreens in their neighborhoods. They enjoy being able to walk down the sidewalk without severely mentally ill homeless people — who should be in institutions where they can receive actual care — urinating on curbs. They should not have to instruct their children to hop over used needles on street corners.

Yet the governance of "compassion" continues. So does the migration away from such foolhardy policy. The top outbound states in America, according to North American Moving Services, were all deep blue: Illinois, New York, California, New Jersey, and Maryland. The top inbound states were all red or purple: Idaho, Arizona, South Carolina, Tennessee, and North Carolina.

At some point, there will be no more Walgreens in San Francisco. Then we will undoubtedly hear about how this is the product of systemic racism and white privilege; we will hear tell of the brutality of American capitalism. The truth is far simpler: Where leftist governance reigns, criminality thrives. And where criminality thrives, Americans flee.