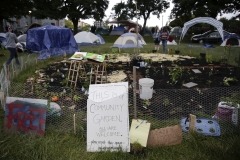 A community garden is seen among tents in Cal Anderson Park in an area being called the Capitol Hill Autonomous Zone (CHAZ). (Photo credit: JASON REDMOND/AFP via Getty Images)

That's because it is.

There are two ways to achieve unity in any group. The first is to set up a few serious standards of conduct, policed with the absolute minimum of compulsion, and then allow freedom in all other matters. This was the founding vision for our federal government. In this vision, we agree not to infringe upon one another's life, liberty, and property, and we create a government capable of preventing or prosecuting such infringements. Then, so long as we abide by those simple standards, we are free to pursue our own paths. Diverse ways of life can coexist within this broader group membership. Governance becomes largely a matter of localism — places with homogeneous values setting further standards for their group membership. But our broadest-group membership is easy to obtain and easy to maintain.

The founding vision has now been abandoned in pursuit of something more fulfilling : a communitarian vision of reality in which the will of the mob is perceived as virtuous, in which every man has the right to protect himself from the vicissitudes of life and the cruelties of history by demanding redress from his neighbors, and in which our strongest bonds are forged at the most centralized level.

This second path toward unity requires purification. This path seeks homogeneity in place of diversity, top-down standards in place of localism. Standards for membership are not weak or broad — membership cannot be obtained simply by avoiding encroaching on others' life, liberty, or property. Membership can only be obtained and maintained through strict compliance with an increasingly arcane set of rules and standards. Politically, this means a demanding legal regime with heavy coercion. Culturally, this means braying mobs of ideological enforcers, casting out unbelievers into the cornfields.

This second model of governance is promoted by the political left today. In this view, diversity of viewpoint cannot be allowed; unity of viewpoint in all things is the predicate for all serious change. Once the group has been purified, change will require only the snap of a finger. No more gridlock; no more conversation. The collective can be activated quickly and powerfully.

This second model of governance is totalitarian in nature, and it is toward that model we are now moving as a society. Politically, those who deny that the collective ought to have the power to override individual rights must be punished; culturally, they must be exiled. They must be deemed unworthy. To stand up for individual rights in this climate means to be labeled a defender of privilege. To deny the systemic evil of the United States means to betray your moral unworthiness.

The great irony is that the second model of unity — the totalitarian purification rituals we watch before us — will never achieve unity. It will achieve further division, as more and more people fall short of ideological purity, or refuse to bow before the ideological demands of the perpetual revolutionaries.