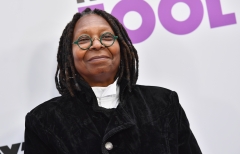 Former award-winning actress and highly decorated blowhard Whoopi Goldberg made a fool of herself. This came as no surprise; Goldberg does that quite regularly on "The View." The good news for Goldberg is that no one notices — trying to identify which fatuous host takes the cake for most imbecilic comment on any given day is an exercise in multivariate calculus, so Goldberg often tends to meld into the wallpaper of daftness.

But on Monday, Goldberg truly stood out.

Discussing an obscure Tennessee school board deciding to remove the Pulitzer Prize-winning graphic novel "Maus" from a Holocaust unit for eighth-graders, Goldberg launched into an explanation of the Holocaust dazzling in both its ignorance and its malignity.

Joy Behar, the usual top contender for the Crown of Idiocy, led off by explaining that the Tennessee school board members "don't like history that makes white people look bad." Then Goldberg got going: "Maybe. This is white people doing it to white people. Y'all go fight amongst yourselves."

This comment would have been insanely insulting, in and of itself: Here was Goldberg, referring to Nazis and Jews as "white people doing it to white people." But Goldberg was just getting started.

"If we're going to do this," Goldberg said, "let's be truthful about it because the Holocaust isn't about race. No. It's not about race."

At this point, Ana Navarro attempted to intervene and stop the crazy train.

"But it's about white supremacy," Navarro said. "It's about going after Jews and gypsies."

No, said Goldberg. "These are two white groups of people...you're missing the point. The minute you turn it into race, it goes down this alley. Let's talk about it for what it is. It's how people treat each other. It's a problem. It doesn't matter if you are black or white because black, white, Jews, Italians, everybody eats each other."

The asininity cannot be overstated here. It is absolutely clear that the Nazis targeted Jews as a race; Hitler wasn't exactly hiding the ball when he stated in "Mein Kampf": "Is not their very existence founded on one great lie, namely, that they are a religious community, whereas in reality they are a race?" Hitler repeatedly referred to the Jews as a race of parasites, and targeted Jews on the basis of ethnicity rather than religious adherence.

The question must be asked, then: What, precisely, did Goldberg think she was doing? The answer is that she believed she was upholding the intersectional theory of race and racism. That theory holds that society is structured in a hierarchy of victimized and victimizing groups; that groups that are disproportionately successful are victimizers, and that groups that are disproportionately less successful are victimized. Jews are disproportionately successful; thus, they are white. And, intersectional theory posits, racism is not defined as a belief that any other race is superior or inferior to another; instead, racism means — as the Anti-Defamation League recently defined it — "the marginalization and/or oppression of people of color based on a socially constructed racial hierarchy that privileges white people."

These two concepts, taken in tandem, mean that Jews cannot be considered victims of anti-Semitism. They are highly successful; they are white. Thus, they cannot be members of a victimized minority. This is why the mainstream Left is so reluctant to recognize the antisemitism of Hamas (Democratic Rep. Jamaal Bowman, for example, condemned Israel for defending itself against rocket attacks by Hamas by decrying "Black and brown bodies being brutalized and murdered"); it is why the mainstream Left is complicit in the lie that the only true anti-Semitism springs from white supremacists, ignoring actual acts of Jew-hatred by members of minority populations. The intersectional Left's conspiracy theory — that a cabal of white victimizers (including Jews, and now, Asians) control society for its own benefit — inherently crosses streams with anti-Semitism.

Goldberg's comments aren't an aberration. They're merely the latest iteration of a pernicious and perverse theory of power in politics — a conspiracy theory about groups that succeed and the systems in which they succeed.