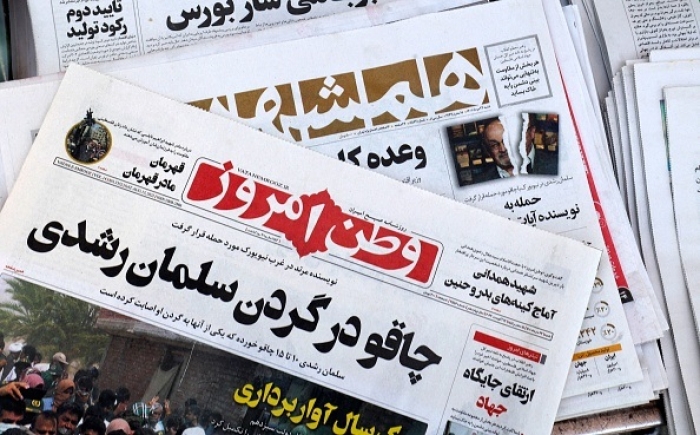 This picture shows the front page of the Iranian newspaper Vatan-e Emrooz, with the title reading in Farsi: "Knife in the neck of Salman Rushdie", in the capital Tehran on August 13, 2022, a day after a man stabbed British author Salman Rushdie, the target of a 1989 Iranian fatwa calling for his death, during a literary event in New York state. (Photo by ATTA KENARE/AFP via Getty Images)

In October 2018, agents of the Saudi Arabian government murdered columnist and Muslim Brotherhood fellow traveler Jamal Khashoggi in gruesome fashion. The fallout in the American media was cataclysmic for the relationship between the United States and Saudi Arabia.

Two years after the murder, then-candidate Joe Biden issued a statement "mourning Khashoggi's death" and calling for reassessment of the American relationship with the Kingdom.

In 1989, the Iranian government issued its death sentence on Rushdie, encouraging anyone within its purview to kill him; in the aftermath of Rushdie's stabbing — Rushdie ended up on a ventilator and will likely lose an eye — the Iranian government issued a statement blaming Rushdie "and his supporters...We believe that the insults made and the support he received was an insult against followers of all religions."

Just days before the attack on Rushdie, a member of the IRGC was charged by the Justice Department in a murder-for-hire attempt on former national security adviser John Bolton.

The attempt was reportedly retaliation for the American drone strike on IRGC commander Qasem Soleimani in 2020; the suspect tried to pay an undercover federal agent $300,000 for the killing.

A few weeks before that, a suspect carrying a loaded AK-47 was arrested outside the home of an Iranian American journalist, Masih Alinejad. According to Alinejad, the Iranian government has promoted a widespread campaign requesting her kidnapping; last year, news broke that four Iranians had been arrested while planning to do just that.

Meanwhile, Iranian state media is calling for more violence; an editorial from Kayhan newspaper, the editor of which is chosen by the Ayatollah Ali Khamenei, stated this week, "God has taken his revenge on Rushdie. The attack on him shows it is not a difficult job to take similar revenge on Trump and Pompeo and from now on they will feel more in danger for their lives."

The response to all of this has been deafening from the Biden administration. The White House released an extraordinarily tepid statement "reaffirm(ing) our commitment" to "Truth. Courage. Resilience." Biden said that he stood "in solidarity with Rushdie and all those who stand for freedom of expression." There was no talk of reevaluating America's relationship with Iran.

Indeed, the precise opposite has happened. The Biden administration is pursuing a nuclear deal that would loosen sanctions on the Iranian regime while giving them a clear pathway to development of a nuclear weapon.

Instead of viewing the Iranian regime as an intransigent supporter of international terrorism from New York to Yemen to the Gaza Strip to Syria to Lebanon to Iraq, the Biden White House has decided that it must cut a deal at all costs.

The New York Times reported this week, "For the first time in many months, European officials expressed increasing optimism on Tuesday that a revival of the 2015 Iran nuclear deal may actually be agreed upon by Iran and the United States."

Biden's shocking alacrity in seeking a signature from the Iranian regime — a regime with the blood of thousands on its hands, including Rushdie's — demonstrates the abjectly foolish pusillanimity of this administration. It also shows the world's most radical regimes that radicalism will be tolerated by a Democratic White House so long as those regimes promise a revised balance of power in line with longtime Democratic shibboleths.

Biden wishes Iran to be at the center of a revised Middle Eastern power balance, in line with the idiotic thought of former President Barack Obama; he is therefore willing to kowtow to the mullahs while breaking with the Saudis. If you are the Taliban, the Biden administration will surrender; if you are Iran, the Biden administration will prostrate itself.

This isn't just cowardice. It's delusional cowardice. And it's dangerous, not just to Rushdie, Bolton, Pompeo and Trump, but to anyone who opposes predations by America's enemies.

(Ben Shapiro is host of "The Ben Shapiro Show," and Editor-in-Chief of DailyWire.com.)