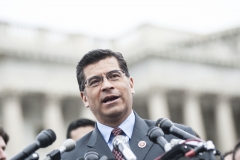 President Biden's worst nominee for a Cabinet post is Xavier Becerra to serve as Secretary of Health and Human Services (HHS). On Feb. 23, the U.S. Senate Committee on Health, Education, Labor & Pensions will conduct a hearing on his nomination. The man is a menace to life and liberty and has no business serving in this capacity.

Here are 16 reasons why Becerra should not be confirmed.

1) It would be impossible to find a more enthusiastic advocate of abortion-on-demand. While a majority of Americans support legal abortion, it does so with important qualifications: it does not support abortion for any reason and at any time during pregnancy. As such, Becerra is out of the mainstream. Indeed, he is an extremist. That is why he secures a 100% rating from NARAL and Planned Parenthood and a 0% score from National Right to Life.

2) Becerra's lust for abortion even allows him to support partial-birth abortion, a practice which allows the abortionist to crush the skull of a baby who is 80% born so that the child can exit the woman's birth canal.

3) For all the talk about allowing pregnant women the right to choose, Becerra is on record seeking to prevent them from choosing life. To be exact, when he was the California Attorney General, he lost in the U.S. Supreme Court in his attempt to effectively close down crisis pregnancy centers across the state.

In 2016, in National Institute of Family & Life Advocates v. Becerra, the high court ruled against his mandate forcing abortion-alternative centers to post a message saying the state will pay for a woman's abortion. This not only negated the reason these centers were founded, it constituted "compelled speech," and was therefore unconstitutional under the First Amendment. In short, Becerra's idea of freedom to choose is limited to choosing abortion over adoption.

4) If someone who assaults a pregnant woman winds up killing her unborn child, that would seem to make him a criminal. But not to Becerra. As a congressman, he voted against a bill that would criminalize the killing of an unborn child during the commission of another crime. According to Becerra, the unborn child has no rights that the law needs to respect.

5) Though it is hard to believe, there are underground railroads run by abortion extremists that literally transport minors to states where they can easily get an abortion. This is a particularly obscene form of human trafficking that makes even pro-abortion politicians wince. Not Becerra. He voted against a ban on this hideous practice.

6) Becerra proved himself to a pro-abortion zealot once again when he brought charges against pro-life activists who went undercover to film Planned Parenthood officials trafficking in aborted baby parts. He brought felony charges against them. His decision was so radical that even the abortion-rights Los Angeles Times criticized him for "disturbing overreach." In 2017, a judge dismissed 14 of the 15 charges as legally insufficient.

8) Human cloning is an issue that most lawmakers and judges have declined to address. Their reluctance is grounded in the moral and legal dilemmas associated with making a genetically identical copy of a human being in the laboratory. Becerra, however, is different. When he was in  Congress, he approved human cloning for research purposes.

9) It makes sense that if someone does not value innocent human life at its beginning that he would not value it at its end. Becerra is a classic example of this mentality. When he was Attorney General in California, his strong support for doctor-assisted suicide won him the kudos of the most radical proponents of this cause.

10) Conscience rights are at the very heart of religious liberty. To put it mildly, Becerra is not a fan. When those who owned Hobby Lobby were pleading their case, invoking their conscience rights as grounds for objecting to paying for birth control in their healthcare plan, Becerra maintained that such rights should not matter. He said it was one thing to hold to religious beliefs, quite another to act on them. Fortunately, the U.S. Supreme Court did not ratify such contorted logic and sustained the conscience rights of the business owners.

11) Few Attorneys General in the United States fought more ferociously to deny the Little Sisters of the Poor their religious rights than Becerra. The nuns objected to being forced to pay for abortion-inducing drugs, contraception, and sterilization in their healthcare plan. At every stage, Becerra hounded them. He even filed lawsuits against the Trump administration for shielding the nuns from the HHS mandate passed under the Obama administration.

12) Should a baker be forced against his will to make a wedding cake for two men planning to marry? The owner did not object to selling his products to gay men. What he found objectionable, on religious grounds, was being ordered to inscribe a wedding cake for two homosexuals; to do so would force him to affirm their status. Becerra said too bad for them—their religious convictions should be overridden. This explains why he filed an amicus brief on the part of the gay men. But once again, he lost.

13) Practicing Catholics, among others, do not believe that people of the same sex should be adoptive parents. Anyone is free to disagree, but respect for the diversity that Catholicism affords suggests that Catholic foster care agencies should be entitled to practice what they preach. Becerra disagrees. He is so wedded to the LGBT agenda that as California Attorney General he even supported a law to deny California public agencies, public universities and boards the right to fund work-related trips to states that respect the religious liberty interests of foster care agencies.

14) In January 2017, at his confirmation hearings as California Attorney General, Becerra stunned lawyers when he said that it was one thing to respect the religious rights of individuals, quite another to extend these rights to organizations. Thus did he try to marginalize houses of worship, faith-based organizations, and religious non-profits. It doesn't get more absurd, or constitutionally wrongheaded, than this.

15) The Equality Act is not law but it is strongly supported by Biden. If passed, it would be the most serious assault on religious liberty ever enacted. As a congressman, Becerra was a co-sponsor of this bill. In the name of abortion and LGBT rights, it would not only devastate the autonomy of Catholic hospitals, it would ensure that boys who claim to be girls could compete against biological girls in sports. It would even allow them to shower with girls. When religious liberty objections are made, Becerra dismisses them outright.

16) Over the past year, California Gov. Gavin Newsom imposed the most draconian COVID-19 restrictions on houses of worship in the nation. His limitations on occupancy have been so severe as to abolish the rights of churchgoers. Becerra, of course, was delighted to enforce these strictures.

For all of these reasons, it would be hard to think of a more unfit person in the United States to serve as Secretary of HHS than Xavier Becerra. His positions on life and religious liberty make him an outlier and should automatically disqualify him from serving in this capacity.