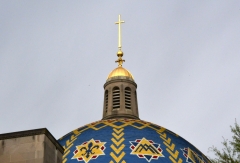 The dome of the Basilica of the National Shrine of the Immaculate Conception as it stood empty in Washington, D.C. on Easter Sunday, April 12, 2020 while the Basilica remained closed to the public due to the COVID-19 coronavirus pandemic. (Photo credit: EVA HAMBACH/AFP via Getty Images)

An anti-Catholic outfit, Catholics for Choice (CFC) did not go to the National Shrine of the Immaculate Conception in Washington, D.C. last night to observe Catholics attending a prayer vigil ahead of today's March for Life. No, its members went to sabotage the event. They projected pro-abortion slogans on the Basilica.

San Francisco Archbishop Salvatore Cordileone, one of the leading pro-life leaders in the Catholic Church, referred to the assault as a "desecration," further branding it as "diabolical."

CFC is led by a lesbian activist, Jamie Manson. She is commanding a sinking ship at CFC and is trying anything to jump-start it. In 2021, she explained her new strategy: "We have to talk back to the anti-choice movement in religious language. Because they're using religious language."

In other words, her idea of using religious language is to disseminate pro-abortion messages at a Catholic pro-life event. That would be like using racist language at a pro-racial justice rally. Moreover, it is not accurate to suggest that pro-life Catholics exclusively use religious language to get their point across: they also use the lexicon of biology.

CFC has no members. It is entirely funded by the pro-abortion establishment. The Ford Foundation has been a major source of funding. It also receives huge grants from The Susan Thompson Buffett Foundation (Warren Buffett is a big fan of abortion), the Hewlett-Packard Foundation, and, of course, George Soros' Open Society Foundation. Without the ruling class, CFC would fold.

The media, which are overwhelmingly pro-abortion, ignored what happened, just as they will ignore the throngs at the March for Life. It's who they are.