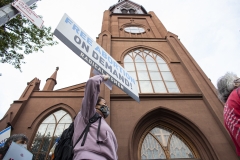 The recent spate of Catholic churches that have been vandalized, as well as the bombing of pro-life crisis pregnancy centers (many of which are run by Catholics), are not a coincidence. Nor is the attempted murder of Brett Kavanaugh, the Catholic Supreme Court justice. They reflect a deep-seated animus against the right of orthodox Catholics to participate in public life.

When Supreme Court Justice Ruth Bader Ginsberg was on the high court, she was joined by Stephen Breyer and Elena Kagan. All three are Jewish. No one complained, nor should they have, about the fact that Jews are roughly 2 percent of the population yet they made up a third of the Supreme Court. But when Catholics are overrepresented — six of the Justices are Catholic (they are a little less than a quarter of the population) — that's a different story.

Those who have spoken critically about the number of Catholics on the Supreme Court include some notable activists and pundits.

Ron Elving at NPR showed it is entirely possible to address the issue of abortion and Catholic judges without making anti-Catholic remarks. But he is unfortunately the exception to the rule.

These activists and pundits have helped to poison the public mind, suggesting that it is patently unfair to have so many Catholics on the high court. In essence, they want a religious test, which is constitutionally proscribed. Worse, they have driven a public narrative about Catholic judges that invites those who are already ill-disposed to Catholics to consider taking things into their own hands.

Catholic churches are being vandalized, crisis pregnancy centers are being bombed, illegal protests are taking place outside the homes of Catholic Supreme Court justices, and one Catholic justice was targeted by an assassin. Make no mistake, these are a direct consequence of this relentless spewing of anti-Catholic invective. It needs to stop.